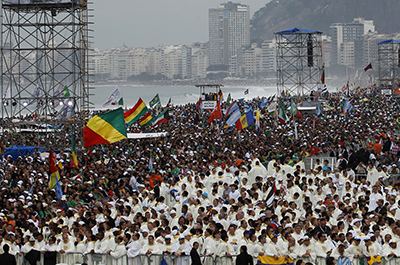 VATICAN CITY — The number of Catholics in the world and the number of priests and permanent deacons rose slightly in 2013, while the number of men and women in religious orders declined, according to Vatican statistics.

For the second year in a row, the number of candidates for the priesthood also decreased.

The numbers come from the Statistical Yearbook of the Church, which was completed in February and published in March. The yearbook reported worldwide church figures as of Dec. 31, 2013.

By the end of 2013, the worldwide Catholic population had surpassed 1.253 billion, an increase of about 25 million or 2 percent, modestly outpacing the global population growth rate, which was estimated at 1 percent in 2013.

Catholics as a percentage of the global population was up less than a percentage point at around 17.7 percent.

As it has done in previous years, the latest Vatican statistical yearbook estimated there were about 4.8 million Catholics that were not included in its survey because they were in countries that could not provide an accurate report to the Vatican; for example, China and North Korea.

According to the yearbook, the region where Catholics make up the largest percentage of the general population is in the Americas, where they account for 63.6 percent of the inhabitants, followed by Europe with 39.9 percent. Asia has the lowest proportion, with 3.2 percent.

During the 2013 calendar year, more than 16 million infants and adults were baptized, according to the statistical yearbook, which added that there has been “a general downward trend in the relative number of (infant) baptisms, following closely the trend of the birthrate in most countries.” The ratio of children under 7 being baptized to the overall number of Catholics has been going down on every continent since 2008, it said.

The total number of priests — diocesan and religious order — around the world grew from 414,313 to 415,348, with a steady increase in diocesan priests present in Africa, Asia and the Americas, and a continued decline in Europe.

The number of permanent deacons reported — 43,195 — was an increase of more than 1,000 over the previous year.

The number of candidates for the priesthood — both diocesan seminarians and members of religious orders — who had reached the level of philosophy and theology studies continued a recent downturn.

Portrait of archdiocese patron on display at main offices