The Vatican published the official schedule for the 10th World Meeting of Families on Tuesday.

The international gathering of Catholic families will be held in Rome on June 22-26 with the participation of the pope and a performance by the Italian musical trio Il Volo.

The World Meeting of Families, usually held every three years, is known as the largest gathering of Catholic families in the world.

While previous events have drawn massive crowds, with more than a million people attending the pope’s closing Mass for the 8th World Meeting of Families in Philadelphia in 2015, the organizers of the 2022 event have limited in-person attendance to 2,000 families due to the COVID-19 pandemic.

At a live-streamed Vatican press conference on May 31, the organizers said they hoped that many families from around the world would take part virtually in the event by tuning into media broadcasts and live streams of all of the speeches and catechesis.

Monsignor Walter Insero, the director of the social communications office for the Diocese of Rome, said: “All communities and families who wish, from all parts of the planet, will be able to feel involved and participate in this important spiritual event thanks to the arranged media coverage.”

Digital participants can receive a certificate of participation and make virtual tours of Rome’s four major basilicas and the Lateran Palace, according to Insero.

Families from Ukraine will participate in person at this year’s World Meeting of Families thanks to a solidarity fund created by the Vatican Dicastery for the Laity, Family, and Life to cover the travel expenses for delegate families from countries facing difficulties.

The solidarity fund is also supporting the participation of delegates from Africa, Asia, Latin America, and Central Europe, in addition to representatives from both the Ukrainian Greek Catholic Church and the Latin Rite Catholic community in Ukraine.

In total, families and delegates from 120 countries will travel to Rome to participate this June, according to the dicastery.

An Italian family from a parish in Rome will also discuss their experience of welcoming Ukrainian refugees into their home.

What will happen and when

The 10th World Meeting of Families will kick off with the Festival of Families with Pope Francis in the Paul VI Hall on the evening of Wednesday, June 22.

During the opening festival, Il Volo will perform and share the stage with their own families. Five families will also share testimonies on experiences ranging from forgiveness after a crisis and the call to holiness in the face of tragedy.

This will be followed by a speech by Pope Francis and a performance of the official hymn of the meeting by the choir of the Diocese of Rome.

The first full day of speakers and panels will start on Thursday, June 23. The day will begin with Mass offered in English in St. Peter’s Basilica at 8:30 a.m. local time and conclude with an evening concert and guided tour of the Lateran Palace.

The panels on the first day of the conference in the Paul VI Hall will focus on two themes. The first is Synodality and the Domestic Church and the second will be “Accompanying the first years of marriage.”

On the second day of the conference, Friday, June 24, panelists will discuss the identity and mission of the Christian family with a panel on family life and technology, including social media, and an afternoon speaker on sexual education. The delegates will conclude the day by spending time with parish communities in Rome.

Saturday, June 25 will begin with Eucharistic Adoration in the Paul VI Hall, followed by a discussion of paths of holiness in family life with a special focus on married saints. Pope Francis is scheduled to offer the main Mass for the World Meeting of Families at 5:30 p.m. local time in St. Peter’s Square.

The World Meeting of Families will conclude with the Angelus prayer in St. Peter’s Square with the pope on Sunday, June 26.

Cardinal Angelo De Donatis, the vicar general of Rome, announced on May 31 that a beatified married couple will serve as the patrons of this year’s World Meeting of Families.

Blessed Luigi and Maria Beltrame Quattrocchi were the first married couple to be beatified together by the Catholic Church in the presence of their children. The two were married in Rome in 1905 and beatified by John Paul II nearly 100 years later in 2001.

“In their spousal union, Luigi and Maria welcomed the great gift of life with confidence and joy,” De Donatis said.

“I urge you to embrace the example and witness of the Beltrame Quattrocchi family, which embodies the theme of the upcoming World Meeting of Families, ‘Family love, vocation and the way to holiness,’” De Donatis said.

“Edified by their witness of faith, we entrust to Blessed Luigi and Maria all the families of the world, especially those wounded and in difficulty, tried by poverty, sickness, and war.” 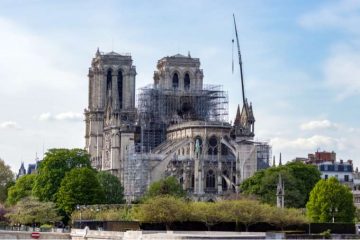