Peoria, Ill., Nov 18, 2019 / 02:42 pm (CNA).- The Diocese of Peoria announced Monday that Venerable Fulton Sheen will be beatified Dec. 21 at the city’s Cathedral of Saint Mary of the Immaculate Conception.

Sheen had been ordained a priest of the diocese in that cathedral Sept. 20, 1919.

“It seems entirely fitting that the Beatification will take place at the end of this 100-year anniversary of his ordination to the priesthood,” the Peoria diocese stated Nov. 18.

Sheen was born in Illinois in 1895, and was 24 when he was ordained a priest.

He was appointed auxiliary bishop of New York in 1951, and he remained there until his appointment as Bishop of Rochester in 1966. He retired in 1969 and moved back to New York City until his death in 1979.

Sheen was a beloved television catechist during the 1950s and ’60s in the United States. His television show “Life is Worth Living” reached an audience of millions.

The Congregation for the Causes of Saints promulgated a decree July 6 recognizing a miracle attributed to Sheen’s intercession, which allowed for his beatification.

The miracle involves the unexplained recovery of James Fulton Engstrom, a boy born apparently stillborn in September 2010 to Bonnie and Travis Engstrom of the Peoria-area town of Goodfield. He showed no signs of life as medical professionals tried to revive him. The child’s mother and father prayed to Archbishop Sheen to heal their son.

The Peoria diocese opened the cause for Sheen’s canonization in 2002, after Archdiocese of New York said it would not explore the case. In 2012, Benedict XVI recognized the heroic virtues of the archbishop.

The beatification follows legal battles in civil courts over the location of Sheen’s body.

His corpse was transferred to the Peoria cathedral June 27 after a protracted series of suits.

Sheen’s will had declared his wish to be buried in the Archdiocese of New York Calvary Cemetery. Soon after Sheen died, Cardinal Terence Cooke of New York asked Joan Sheen Cunningham, Sheen’s niece and closest living relative, if his remains could be placed in the crypt of St. Patrick’s Cathedral in New York City, and she consented.

In September 2014, Bishop Daniel Jenky of Peoria suspended Sheen’s cause on the grounds that the Holy See expected Sheen’s remains to be in the Peoria diocese.

Cunningham has since said that Sheen would have wanted to have been interred in Peoria if he knew that he would be considered for sainthood. In 2016, she filed a legal complaint seeking to have her uncle’s remains moved to the Peoria cathedral. 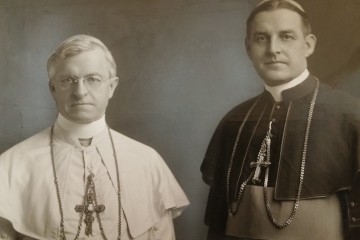