CNA Staff, May 31, 2020 / 12:10 pm MT (CNA).- The Venezuelan bishops published an exhortation May 28 calling for “a consensus among all and an inclusive national accord” to save the country from “immense national, material, institutional and social catastrophe.”

Under the socialist administration of President Nicolas Maduro, Venezuela has been marred by violence and social upheaval, with severe shortages of food and medicine, high unemployment, power outages, and hyperinflation. Some 4.5 million Venezuelans have left the country since 2015.

In their message, “A voice is heard of someone crying bitterly,” the bishops said that “the country is near economic bankruptcy of profound proportions” which “it won’t be able to come out of, unless all people definitively demand answers from the authorities and the entire political, social and cultural leadership, and a national emergency is declared.”

The bishops underscored “it is unacceptable for the situation we’re living in to continue,” and that what is most urgent in view of “the immense catastrophe” in all areas is “far reaching moral action, an ethical shake-up, and a socio-political convergence” that sets the country on the right course.

The bishops pointed out that change will not be achieved “by eliminating those who think differently”, but “including all political factors and the different institutions in the search for concerted solutions”, along with a “new spiritual climate and renewed leadership” that will ward off corruption.

“Disunity and perennial confrontation aggravate the situation and sink us further as a people,” they said.

Given the situation, the bishops called for “an inclusive long range national accord to save Venezuela from the extremely grave crisis it is engulfed in and to initiate processes to rescue and recover the country socially, politically and economically.”

“Economically we see the country adrift, without economic plans in view of the possibility of companies closing down and many workers losing their jobs; the same is true of workers in the informal economy (that operates outside the system) which is the majority of them. Without daily sustenance, there will be more hunger and suffering in families,” the bishops alerted.

“The moral unsustainability of the current situation requires that radical change,” they stressed.

“The best contribution that we as citizens can make to the country is that working from our social institutions, we participate in the search for a way out (…). This will imply new political leadership that guides the country towards progress and lets go of suffocating and toxic ideologies that create suffering and death. Thus, hope will be reborn with a merciful and Samaritan disposition,” the country’s bishops proposed.

The situation in Venezuela is “very problematic” the bishops said, due to COVID-19 pandemic the country is experiencing, in addition to “the ravages of serious economic, political and social problems that are intensifying every day.”

“The presence of the pandemic has only made more evident the numerous shortages the people are suffering from, as well as the inability to provide adequate responses to them, besides the partial solutions which are necessary but insufficient, since these ills must be pulled up from the roots.”

The bishops noted that the lockdown and social distancing have “managed to stop the spread of the disease for a time,” but in the last week, “the number of those infected has increased alarmingly.”

Although the majority of the population “has behaved in a very civic-minded manner,” abiding by the prevention protocols, nevertheless “an immense cry” can be heard from the millions “without economic resources, food, medicine, work, adequate supply of electricity, running water, transportation, cooking gas and fuel.”

“It is necessary to prepare, as soon as possible, with the broad participation of all social sectors, a roadmap to lift the lockdown that includes making it easier for workers to get to their jobs, reactivating the economy and commerce, the progressive opening of the churches for liturgical celebrations, in compliance with the prevention protocols that the health emergency calls for,” the bishops said.

They also stressed that the “crisis cannot be managed only as a weapon of social and political control” where human rights violations are allowed.

Social unrest due to “the numerous shortages has been expressed in various protests that at times have been repressed with violence, but hunger can’t be contained with repression,” they pointed out.

At the conclusion of their message, the Venezuelan bishops pointed to Venerable Dr. José Gregorio Hernández–soon be beatified–as a model who “encourages and inspires us to follow the path he took as a man, doctor and Christian committed to his people.”

“José Gregorio is a symbol of the unity of the country and the path of hope. May the Virgin of Coromoto, the patroness of Venezuela, bless us at the culmination of this month of May dedicated to so many Marian devotions and may she intercede before God for the end of the disease and the deep crisis we are going through,” the bishops said. 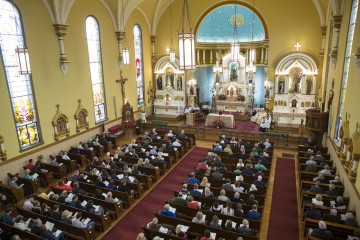