Deadline for “Warriors to Lourdes” Spiritual Journey is Monday, January 15, 2018 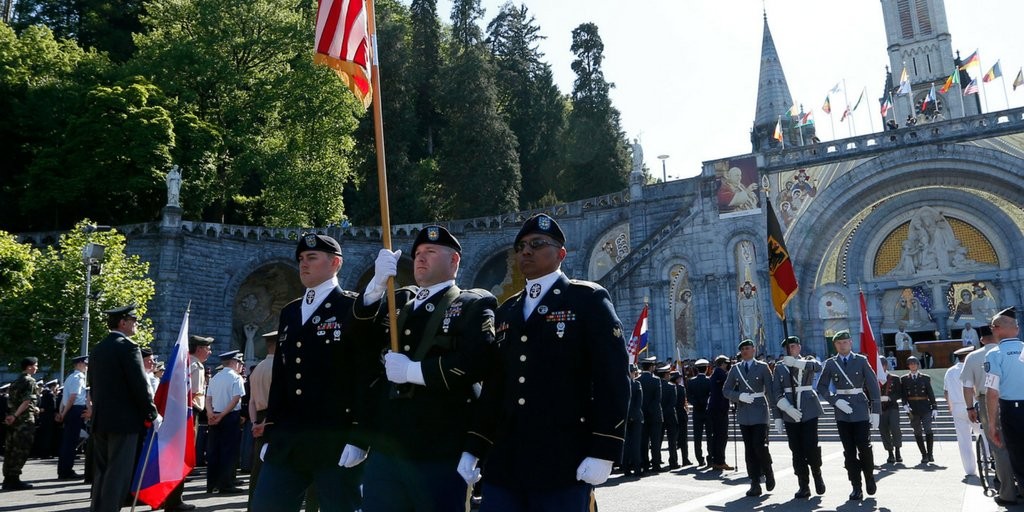 WASHINGTON, D.C.—U.S. Military personnel, including the wounded, ill, and injured, are now invited to apply for an all-expenses-paid, round-trip journey to the Marian grotto and spring baths at Lourdes, France, during the 60th annual Pèlerinage Militaire International (PMI)—or “International Military Pilgrimage”—May 15 to 22, 2018. The PMI will draw tens of thousands of troops, veterans, and others from around the world to the famous Marian shrine where the Blessed Virgin Mary appeared to Saint Bernadette Soubirous in 1858. The theme for the 60th PMI is Pacem in Terris (Peace on Earth).

The Warriors to Lourdes excursion amounts to a week-long retreat in which pilgrims take part in an international opening ceremony, special Masses, visits to the baths at the Sanctuary of Our Lady of Lourdes, and a candlelight vigil. U.S. servicemen or women currently on active duty, recently retired, or honorably discharged—including those suffering from Post-Traumatic Stress Disorder (PTSD)—are encouraged to submit an application to the Knights of Columbus (K of C), which co-sponsors “Warriors to Lourdes” along with the Archdiocese for the Military Services, USA (AMS).

Knights of Columbus Charities, Inc., will cover expenses for approved non-wounded, wounded, ill, or injured warriors, and their designated caregivers. Preference will be given to post-9/11 era warriors. Acceptance and full coverage for pre-9/11 era wounded, ill, or injured veterans will be determined on a case-by-case basis. Companions and volunteers are invited to apply at specially priced rates.

The Warriors to Lourdes pilgrims will depart either on May 15 or 16, depending on their place of origin. In the U.S., flights leave Dulles (IAD), Hartsfield-Jackson Atlanta (ATL), and Raleigh-Durham (RDU) International Airports on May 15 and return May 21. Flights leave John F. Kennedy (JFK), Houston’s George Bush (IAH), Seattle-Tacoma (SEA), and Los Angeles (LAX) International Airports on May 16 and return May 22. Barring exceptions, pilgrims are responsible for their own transportation to their respective airports and all associated costs, including airport parking.

In Europe, pilgrims will depart Kaiserslautern, Germany, by bus on Wednesday, May 16, and return May 21.
Applications will be reviewed by the pilgrimage leadership team and medical director. Each pilgrim package includes lodging, meals, PMI credentials, and, in the U.S., round-trip airfare from Washington, D.C.; Atlanta; Raleigh-Durham; New York City; Houston; Seattle-Tacoma; or Los Angeles. The K of C will book flights from the nearest local airport to the seven departure cities for all pilgrims outside those areas.

Since all pilgrims will lodge in a hotel, the wounded, disabled, or sick warriors must be able to fully perform their “activities of daily living” either alone or with the assistance of their designated caregivers. Potential applicants and their clinical providers should not anticipate that professional medical or nursing services, including hospitalization, will be delivered during the pilgrimage. In addition, potential applicants must be spiritually motivated to participate as a pilgrim.

The PMI traces its historical roots back to World War II. During the War, members of the French military visited the site of St. Bernadette’s apparitions, where they offered prayers for peace. In December of 1944, U.S. military personnel joined British, Belgian, French, and Russian military representatives for a Mass at the Basilica of Our Lady of the Rosary. After the War, French soldiers and their chaplains invited German soldiers and their chaplains to gather to pray together. The purpose of this initiative was to heal physical, emotional and spiritual wounds and reconcile the past between these former adversaries by recognizing their common identity as Christians in search of peace. The first official PMI was celebrated in 1958—13 years after the war and one-hundred years after the apparitions.

To apply for the 2018 Warriors to Lourdes journey, click here.

Applications and payments in full (if applicable) are due no later than January 15, 2018.

Applicants may be contacted by pilgrimage staff with additional questions. All applicants will be notified of their application status beginning February 15, 2018.

To sponsor a warrior, go here.

To follow the journey online or in social media, or to share your own experience with Warriors to Lourdes, use the hashtag #WarriorsToLourdes.

Don't confess other's faults, own up to sins, pope says at audience

Deadline for “Warriors to Lourdes” Spiritual Journey is Monday, January 15, 2018