This past January, prior to our school’s annual participation in the March for Life in Washington, D.C., we visited the U.S. Holocaust Memorial Museum. In order to get to the permanent exhibit, you have to take an elevator to the fourth floor. Upon boarding the elevator each person is given an identification card of a real person who lived during the Holocaust. On the front read the words: “For the dead and the living we must bear witness.”

The person who “shadowed” me that morning was Daniel Schwarzold, a Polish Jew. Prior to the war, he was a successful businessman. In 1941, after the Germans occupied the city of Lvov, he and his family were placed in the ghetto. Ironically, to protect his family, he purchased false “Polish Catholic” ID cards. However, during a raid at the Jewish council offices, he was shot and killed as he tried to escape by jumping from a window. It was Tuesday, Sept. 1, 1942. He was 41 years old.

As I progressed through the exhibit, Schwarzold’s “shadowing” turned to “haunting.”
The question which stayed with me for some time afterwards was “What would I have done?” Of course, I nobly would have challenged the Nazi regime up to and including death. My name would be synonymous with Franz Jagerstatter, Edith Stein, Dietrich Bonhoeffer, and Alfred Delp, SJ. Honestly, as those persons were more the exceptions than the norm, I’m not so sure what course I would have taken.

Another more difficult question to answer is whether the Christian faith and Catholic culture expressed then would have led me to protect Jews or persecute them.

Today, the question is almost unimaginable for me to ask. In the relatively brief period of fifty years since the beginning of the Second Vatican Council, I know that I belong to a Catholic tradition which has great affinity for Judaism. Dialogue between the traditions is a given. Renewed attention to scripture has brought a deeper appreciation of the Hebrew Scriptures and Jesus’ Jewishness.

This is markedly seen in a passage from Vatican II’s landmark document Nostra Aetate: “True, authorities of the Jews and those who followed their lead pressed for the death of Christ (John. 19:6); still what happened in His passion cannot be blamed upon all Jews then living, without distinction, nor upon the Jews today. Although the church is the new people of God, the Jews should not be presented as repudiated or cursed by God, as if such views followed from the holy Scriptures. All should take pains, then, lest in catechetical instruction and in the preaching of God’s Word they teach anything out of harmony with the truth of the Gospel and the spirit of Christ” (NA  #4).

Pope John Paul II could well be considered the pope who did more to foster and develop the relationship between Catholics and Jews than any other pope. In this he is only following the lead of Vatican II. This Polish pope appeared to use his personal relationship with his closest childhood friend, Jerzy Kluger, and apply it to all of Judaism. Drawing upon his acting background, John Paul II’s legacy toward Jews is best captured in his real and symbolic visit to the Synagogue of Rome in 1986 and the Holy Land in 2000. In both places he reaffirmed that God’s covenant with the Jewish people is blessed and irrevocable.

As for me, I think of my 93-year old Jewish neighbor, Gertie. What an opportunity I have to convey to her and others that prejudice and discrimination toward Jews is inconceivable with my discipleship in Jesus and Catholic faith.

As the identification card at the museum read “For the dead and living we must bear witness.”

It’s what keeps me Catholic.

What is the ‘New Evangelization?’ 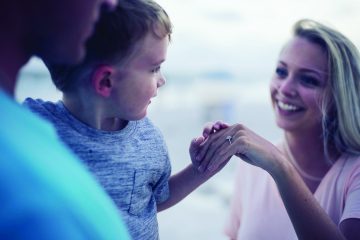