When the Game Stands Tall isn’t a bad film

When the Game Stands Tall, a sports drama from Affirm Films and Mandalay Pictures based on the true story of a Catholic California high school football team, is a wholesome flick. The movie was released on August 22.

The movie has a good message — winning isn’t everything, being a good person is more important. The film isn’t afraid of faith. Twice viewers see players reciting the “Our Father” and Catholic imagery is present in scenes inside De La Salle High School.

Coach Bob Ladouceur, played by Passion of the Christ star Jim Caviezel, delivers a stirring eulogy at the funeral of one of his players as well and those moments serve to remind the audience of the otherwise formulaic sports film that this one is about more than the big game.

Still, it is about the big game to a degree. De La Salle High School was famous for a 151-game winning streak, all under coach Ladouceur. The film deals with the win streak but also the aftermath of its ending and how the team deals with that adversity to come back and have a chance to play for a title once again. 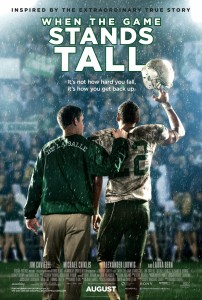 Along the way the film struggles at times to know what it is about. There’s the story of two close friends on the team who grew up poor and want to play college football together. There’s the overbearing, abusive father who pushes his son to let him live vicariously through him. There’s bits about coach Ladouceur’s marriage and his relationship with his son and also his own struggles with his health.

In trying to tell so many stories, the film misses out on the opportunity to provide more emotional punch in each one.

The football scenes, however, are well executed. The scenes setting up the culture of Spartan football and coach Ladouceur’s extolling his players to give a “perfect effort” are at times inspirational.

Perhaps the seminal moment of the film, in which a player with a chance to win a state record has to make a crucial decision about individual success vs. team spirit, absolutely hits home the way the filmmakers likely intended.

The casting fits well. Caviezel plays a stoic Ladouceur that at times brings down the movie, but appears to be accurate to the source material. The film is an adaptation of a book bearing the same title by sports writer Neil Hayes.

Hunger Games star Alexander Ludwig plays the star running back with the difficult father figure, and his acting is among the film’s best. Michael Chiklis, best known for playing The Thing in the Fantastic Four films, plays assistant coach Terry Edison who brings life to many of Caviezel’s steady but slow moments with great humor. Laura Dern plays Ladouceur’s wife, Bev. Known for her role as Dr. Ellie Sattler in 1993’s Jurassic Park, Dern delivers a believable performance that sadly doesn’t get enough screen time.

Along the way viewers are treated to a nice movie, a wholesome movie, and a movie that tries to challenge the traditional sports movie cliches by adding a dose of faith.

The end result is a nice, refreshing, watchable film that would likely resonate to a degree with members and fans of area Catholic high school football teams.

This movie review by New Media Editor John Stegeman also appears in the September 2014 print edition of The Catholic Telegraph.

When the Game Stands Tall isn’t a bad film

Hostility, indifference make us blind to those in need, pope says