September 29, 2022 Greg Hartman
Home»Features»Why this saint is the patron of souls in purgatory
Features/Home Page

The Catholic Church’s teaching on purgatory — the “cleansing fire” that prepares the elect for heaven — can be difficult to understand. But for one saint, the Catholic imperative to pray for the dead was made very real to him — according to the story, one of his deceased friends appeared to him asking for prayers.

Though such an explicit apparition likely will not happen for most, Catholics can still draw inspiration from the holy example of this saint, Nicholas of Tolentino, whose feast day the Church celebrates on Sept. 10.

Born in 1245 in the town of Sant’Angelo in central Italy, Nicholas was drawn to the Augustinan religious order at a young age after hearing a sermon from the local superior on the vanity of the world. The order was in the nearby town of Tolentino, and after studying for seven years, Nicholas was ordained to the priesthood.

Nicholas was a charitable and holy man who often fasted, practiced self-mortification, and spent long hours in prayer. He fed the poor he encountered in a special way — he gave them blessed bread dipped in water. The reason he did this was that he once had a vision of the Virgin Mary telling him to dip bread in water and eat it to regain his health.

Thanks in part to these “panini benedetti” (blessed sandwiches), Nicholas was known for obtaining healings for many of the sick who lived in Tolentino — and even raising some people from the dead.

The Catholic Church formally defined the doctrine of purgatory during Nicholas’ lifetime, at the Second Council of Lyon in 1274. The doctrine teaches that when a person dies in God’s grace, he or she either goes straight to heaven or undergoes a state of purification before entering heaven called purgatory.

So how did Nicholas become associated with this doctrine?

As the Midwest Augustinians tell it, Nicholas was asleep in bed one night when he heard the voice of a deceased friar he had known. The friar told Nicholas that he was in purgatory and urged him to celebrate the Eucharist for him and other souls there, so that they would be set free by the power of Christ. After Nicholas did so for seven days, the friar again spoke to him, thanking him and assuring him that a large number of souls were now with God.

Nicholas is also the subject of numerous legends — some of which are rather bizarre. A 16th-century painting depicts Nicholas, bedridden and sick, refusing to eat but blessing two cooked partridges (he was a vegetarian). The dead partridges subsequently flew away.

Nicholas died of illness in 1305 or 1306, and Pope Eugenius IV — also an Augustinian — canonized him in 1446 after recognizing some 300 miracles attributed to him. In addition to being the patron saint of souls in purgatory, Nicholas is also considered the patron saint against epidemic disease and against fires. 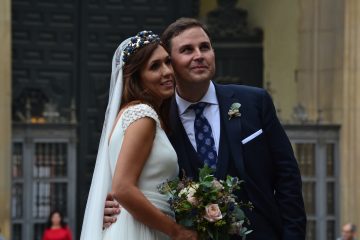