WASHINGTON — A majority of white working-class Catholics – 56 percent – think abortion should be legal in all or most cases, according to a survey by the Public Religion Research Institute.

In contrast, 53 percent of white working-class Protestants believe that abortion should illegal in all or most cases, while 52 percent of the same group oppose same-sex marriage.

“One of the things we’re hoping the survey will do is move the debates around the white working-class and the needs of this class or working Americans … to the realm of facts,” Jones said.

The results are based on telephone interviews with 2,501 adults in the continental United States from Aug. 2 to Aug. 15. Of the total, 857 respondents were working-class whites. The margin of error was plus or minus 2.2 percentage points for the entire survey and 3.7 percent for working-class respondents.

Twenty percent of respondents identified themselves as Catholic, while 19 percent said they were mainline Protestants and 36 percent were evangelical.

The study also found that 34 percent of the working-class attend worship services at least weekly, 33 percent attend occasionally (once or twice month or a few times a year) and 32 percent seldom or never attend church.

“That is interesting,” Jones said of the religious findings. “The stereotype from the left has been that these are kind of hyper-religious folks who vote along culture war lines and are maybe even blind to their economic interests.

“The stereotype from the right … is that this group has lost its grounding in their religiosity and traditional work ethic. The survey found they’re pretty solidly church affiliated and church attenders,” he said.

In addition to abortion, the wide-ranging study looks at a variety of issues facing Americans. Areas surveyed include support for presidential candidates in the Nov. 6 elections, views on the economy, major problems facing communities, cultural influences, consumer preferences and same-sex marriage. In many categories responses were contrasted with white college educated people. In some categories, answers were broken down by religious belief.

The survey found that working-class people are significantly less likely than college-educated people to be married (46 percent to 63 percent) and nearly twice as likely to be divorced (15 percent to 8 percent). The study attributed the differences partly to the greater economic insecurity faced by the working class.

The study identified distinct economic differences by social class. Despite working more hours each week (51 hours versus 46 hours), working-class respondents reported they are in worse financial shape. Two-thirds (66 percent) of the working class said they were in poor or fair financial shape, while 63 percent of college-educated respondents said they were in good or excellent shape.

“The thing that’s telling, and it’s not really surprising if you step back, the top of their agenda is the economy,” Jones added.

Other economic and social concerns working-class people say have higher importance than do college-education people include:

• Lack of opportunities for young people, 56 percent to 46 percent.

• Lack of funding for public schools, 47 percent to 43 percent.

Looking at the upcoming presidential election, the survey found that the working-class favored Republican Mitt Romney over President Barack Obama, the Democrat, by 48 percent to 35 percent. College-educated people preferred Romney by 44 percent to 42 percent. Obama maintained a sizable advantage among blacks (87 percent to 2 percent) and Hispanics (55 percent to 27 percent).

• Seventy percent of working-class people believe the American economic system unfairly favors the wealthy, while 53 percent said that a major challenge to the U.S. is that not everyone has an equal chance in life. Meanwhile, 46 percent of the working-class believe that capitalism and the free market system are at odds with Christian values compared with 38 percent who disagree with that view.

• Thirty-nine percent of working-class Americans feel connected to the government compared to 51 percent of the college educated.

The study, titled “Beyond Guns and God: Understanding the Complexities of the White Working Class in America,” is available at http://publicreligion.org. 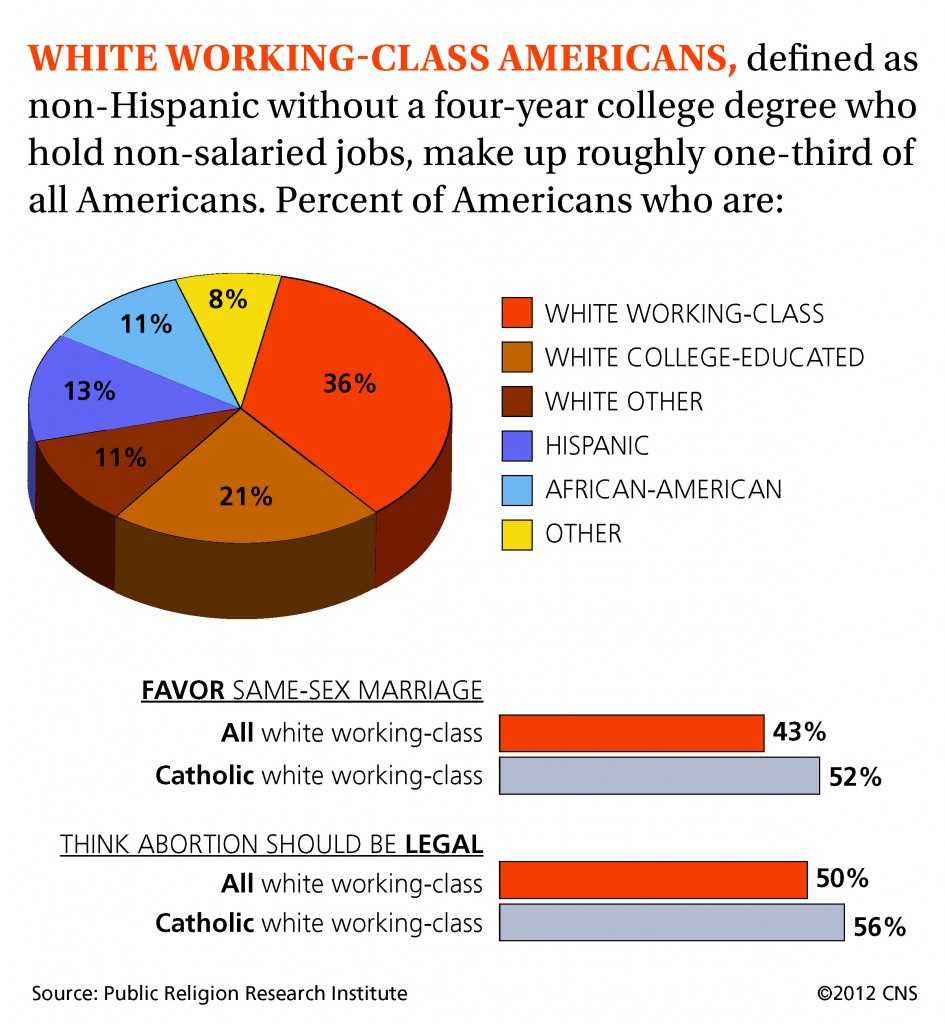