That’s when the first volunteers arrive at the basement parish hall to fire up 20 rented urns for coffee, tea and hot chocolate. It takes an hour for the 100-cup urns to brew the coffee, and at 4:20, the volunteers take delivery of 180 dozen doughnuts from a bakery in suburban Virginia.

Seems as precise as a military operation. But it’s not really run that way, said Suzanne O’Connor, an office assistant in the rectory. “Everyone just pitches in. Anyone you ask to do something, they just do it. It’s a great thing.”

More than 50 volunteers, coordinated by Molly Pannell and Susan Petraglia, have to stay on their toes, since the first of many buses pulls in at 5 a.m.

That’s sometimes difficult, since St. Peter’s is wedged into a residential neighborhood with narrow streets on three sides, and the Madison Building of the Library of Congress on the other, so U.S. Capitol Police sometimes tell the drivers to offload their passengers blocks away.

The first Mass of the day, celebrated by Auxiliary Bishop Martin D. Holley of Washington, began at 7, followed by special Masses at 8:30, 10 and 11 before the next regular Mass at 12:10.

Despite the impending blizzard Jan. 22, O’Connor said the volunteers expected to greet busloads from Illinois, New Jersey, Florida, Alabama, and from as far away as North Dakota, as well as parishioners from the Washington area who arrive at the nearby Metro station and walk over.

Many other parishes in the nation’s capital offer refreshments and a warm place to sit before the pre-march rally — this year at the Washington Monument — begins, but St. Peter’s, just two blocks from the Supreme Court, gets them both arriving early in the morning and straggling in after the march up Constitution Avenue to the East Front of the Capitol. Chairs and tables aren’t put away and the floor given a final mopping until after 6:30. p.m.

O’Connor says the march doesn’t really strain the parish’s resources except in one respect. “This is an old building that doesn’t have very many electrical outlets. So when people want to recharge their phones, we always have to tell a few of them to wait their turn.”

In the afternoon, the parish hall resembles a bus terminal, with announcements of what group is leaving when. “We’ve not had anyone left behind yet,” O’Connor says. “Pretty much everyone leaves happy.”

Way of the Cross: The Third Station 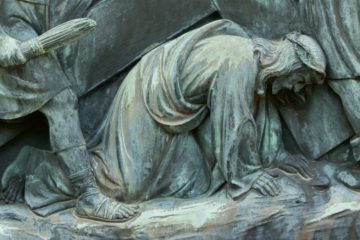