Pope Pius XII said, “The devotion to the Carmelite scapular has brought down on the world a copious rain of spiritual and temporal graces.”

On the feast of Our Lady of Mt. Carmel, July 16, here are 12 keys to explaining the Brown Scapular and its use:

It’s not a charm or an automatic guarantee of salvation, nor is it a dispensation from living the demands of the Christian life.

St. Claude de la Colombière said: “You ask, what if I would want to die with my sins? I answer you, then you will die in sin, but you will not die with your scapular.”

2. It was an article of clothing.

The word “scapular” comes from the Latin “scapulae,” which means “shoulders” and was originally an overlapping article of clothing worn over the shoulders by monks at work.

According to tradition, the scapular, as it is now known, was given by the Virgin Mary herself to St. Simon Stock on July 16, 1251.

Mary told him: “It must be a sign and a privilege for you and for all Carmelites: Whoever dies wearing the scapular will not suffer eternal fire.” Later, the Church extended the use of the scapular to the laity.

The scapular is like a miniature Carmelite habit that all devotees can wear as a sign of their consecration to the Virgin Mary.

It consists of a string that is worn around the neck with two small pieces of brown cloth attached. One is placed on the chest and the other on the back, and it is usually worn underneath clothing.

St. Alphonsus Liguori, a doctor of the Church, said: “Just as men are proud that others wear their uniform, so Our Lady, Mother Mary, is pleased when her servants wear their scapular as proof that they have dedicated themselves to her service, and they are members of the family of the Mother of God.”

6. It has three meanings.

The scapular stands for the maternal love and protection of Mary, for belonging to Mary, and for the gentle yoke of Christ that she helps us to bear.

The Brown Scapular is recognized by the Church as a sacramental — that is, a sign that helps us to live a holy life and to increase our devotion.

The scapular does not impart grace as the sacraments do, but it disposes the person wearing it to the love of the Lord and to repentance if it is received with devotion.

8. It can be given to a non-Catholic.

One day a dying old man was brought to St. Simon Stock Hospital in New York City. A nurse noticed he was wearing the Brown Scapular and called a priest. As prayers were said over him, the man regained consciousness and told the priest that he wasn’t Catholic but wore the scapular as a promise to his friends. The priest asked the man if he wanted to become Catholic, and before he died the man received Baptism and Anointing of the Sick.

9. It was seen in one of the Fatima apparitions.

Lucia, the visionary of Our Lady of Fatima, reported that in her last apparition (October 1917), Mary appeared with the Carmelite habit, the scapular in her hand, and said that her true children wear it with reverence.

Mary also asked that those who consecrate themselves to her wear it as a sign of that consecration.

10. The scapular has been discovered undamaged after burial.

Blessed Pope Gregory X was buried with his scapular and, 600 years later when his tomb was opened, the object was intact. Something similar happened with St. Alphonsus Liguori.

St. John Bosco and St. John Paul II also wore the scapular, and St. Peter Claver vested the scapular with those he converted.

11. There’s a preferred way to receive the scapular.

The imposition of the scapular should preferably be done in community, and in the ceremony the spiritual meaning and commitment to the Blessed Virgin should be clearly expressed.

The first scapular must be blessed by a priest and placed on the devotee while reciting the following prayer:

“Receive this blessed scapular and ask the Most Holy Virgin Mary, on her merits, that you may wear it without any stain of sin and that she guard you from all adversity and bring you unto everlasting life.”

12. Only the first scapular you receive needs to be blessed.

When the first scapular one receives is blessed, the devotee does not need to ask subsequent scapulars to be blessed. Those that are worn out, if they were blessed, should not be thrown away but should be burned or buried, as is suitable for sacramentals. 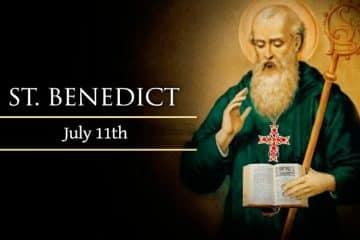