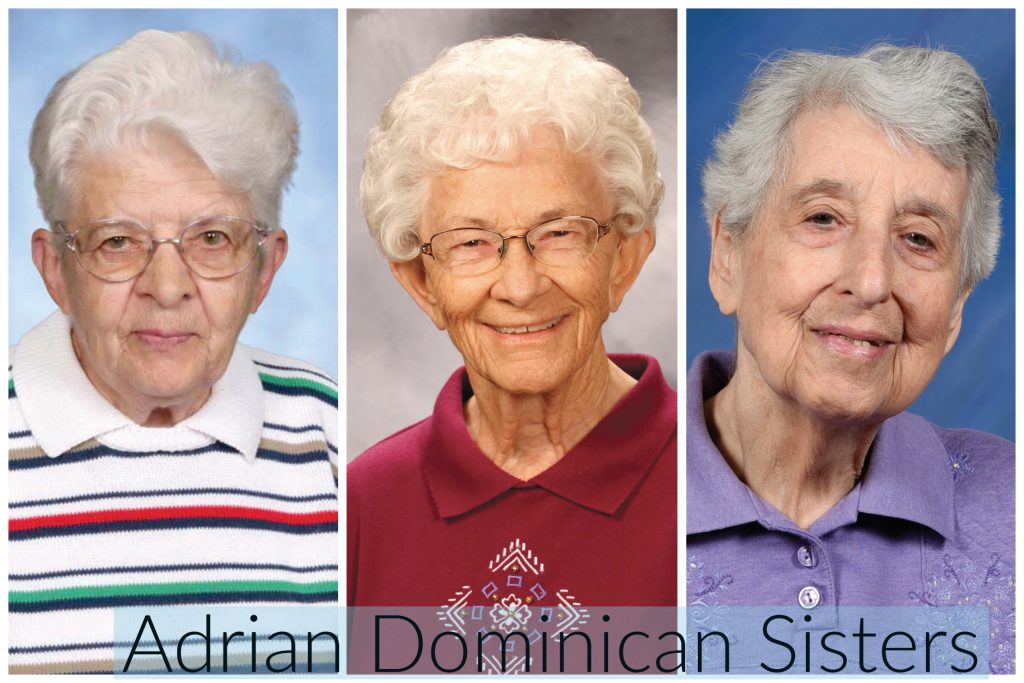 Sister Therese is currently in active retirement at the Adrian Dominican Motherhouse, in the ministry of prayer and presence.

Sister Helen (Ingrid) Hankerd, OP, of Chelsea, Michigan, graduated from Chelsea High School and entered the Adrian Dominican Congregation in 1948 from St. Mary Parish in Chelsea. She made her First Profession of Vows in 1949 and her Final Profession in 1954.

Sister Helen has served as a teacher throughout her years of ministry. After teaching in Detroit for six years, she came to the Archdiocese of Cincinnati, to teach at St. Antoninus from 1956 to 1962. She has since taught at schools in Michigan and Ohio and spent time caring first for her father and then for her sister, both in Chelsea.

Sister Mary (Marie Zita) Miday, OP, a native of Louisville, Ohio, graduated from Louisville High School and on November 21, 1956 entered the Carmelite Monastery at Elysburg, Pennsylvania. She professed first vows in 1959 and final vows in 1962. Sister Mary lived at the monastery until 1975, when she began serving in a number of pastoral ministries at parishes in Ohio, Mississippi, Louisiana, and New Mexico. She returned to the cloister in Elysburg and resided there from 1979 to 1982. She took a leave of absence to determine where God was calling her next.

In 1983 she earned an associate’s degree in fine arts from Siena Heights College (now University), Adrian, Michigan, sponsored by the Adrian Dominican Sisters. She ministered as the Activities Assistant at St. Theresa Home in Cincinnati from 1983 to 1986.

Sister Mary made final profession in the Adrian Dominican Congregation in 1989. She later earned a bachelor’s degree from Lourdes College in Sylvania, Ohio, and a certification in occupational therapy, both in 1989.

Sister Mary ministered in occupational therapy at health care centers in Florida from 1989 to 2005. She ministered at St. Elizabeth Ann Seton Parish in Citrus Springs, Florida, from 2006 to 2010, taking three months off from November 2007 to February 2008 for volunteer service in New Orleans. She retired and moved to the Adrian Dominican Motherhouse in 2010.

“My time in religious life has been extremely rewarding,” Sister Mary said. “I felt so close to our Lord while deepening my prayer life. After that, I felt called to the active lifestyle, to the Adrian Dominicans. The experience of God’s presence did not cease but seemed to draw both lifestyles together in my life.”

The Dominican Sisters of Adrian are a Congregation of nearly 620 vowed women religious whose roots go back to St. Dominic in the 13th century. The Sisters minister in 22 states and in four other nations: the Dominican Republic, Mexico, Norway, and the Philippines. The Vision of the Adrian Dominican Sisters is to “seek truth, make peace, reverence life.”