Kevin Schmiesing’s new book, A Catholic Pilgrimage Through American History, demonstrates that you cannot go far along the highways and byways of the U.S. without stumbling upon a site important to both the Catholic faith and our nation’s history. Dr. Schmiesing, who hails from Sidney, OH, explores the Catholic dimension of our national story through 27 short chapters, each detailing a place, person or event. The short chapters are perfect for leisurely reading; the reader will never have to leave a chapter unfinished.

In choosing his topics, the author is not entirely impartial: numerous vignettes convey Catholicism’s story in the Midwest, including two in the Archdiocese of Cincinnati. Of particular interest are a chapter on the anti-Catholic riot that broke out at the Cathedral of St. Peter in Chains in 1853, and one on how Maria Stein became home to one of the nation’s largest collections of saints’ relics. Another tells of Cincinnati Sister of Charity Blandina Segale, who ministered in the Wild West.

A great historian must be a good storyteller. Dr. Schmiesing is both. The chapters are well-written and fast-moving, consisting of intriguing and entertaining vignettes that provide essential context without getting bogged down in details. The stories successfully connect with broader themes in U.S. Catholic history—immigration, the role of race, geographic expansion, political influence, foreign affairs and responses to prejudice—which provide a lesson in the contours of national history. A refreshing aspect of this book is the sheer diversity of personalities: priests, religious and laity, “good” Catholics and not-so-good ones, cradle Catholics and converts, Catholics and non-Catholics.

For those readers versed in U.S. Catholic history, the book covers familiar territory, including the Spanish Missions, Catholicism on the frontier and the English Catholic founders of Maryland. But there are plenty of lesser-known stories, such as the 1813 court case that enshrined the confessional seal in law, the 1886 murder of a bishop in Alaska, and the role of Catholics in President Lincoln’s assassination (with the reader left to judge their involvement).

For the beginner, the book offers sufficient explanation of persons and events so that no reader is left behind. Dr. Schmiesing introduces each chapter by honing in on a specific person, place or event before widening his discussion to pertinent context, often explaining what predated the chapter’s focus. He then proceeds with the story, before ending with a discussion of the chosen vignette’s legacy or significance.

Among my favorite chapters is the story of the Pope’s Stone— the stone gifted by Pope Pius IX for use in the Washington Monument’s construction. Anti-Catholics stole the stone in 1854, worried that its inclusion in the Monument would symbolize the victory of a tyrannical papacy. The stone was smashed to pieces and thrown into the Potomac River—none of the thieves were ever apprehended.

The stories within A Catholic Pilgrimage Through American History reinforce the prominence of Catholicism in our nation’s history. This well-crafted itinerary assists readers in exploring historically-rich places, reminding us that whether we seek them out in person or vicariously, the sites important to U.S. Catholic history are within our reach. 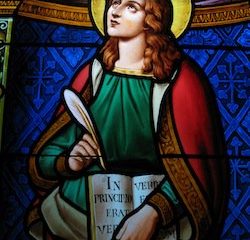