North: Immaculate Conception
When asked why she intends to join the Catholic Church, Amanda Schmerge replied with serene certitude, saying, “It was a slow-growing love.”

Amanda was satisfied as a Methodist, always active in her church. Yet, it seemed a reasonable compromise that her children, ages 4-11, would be baptized in the Catholic Church like their dad was. But another compromise for the Schmerge family was to alternate on Sunday mornings between her Methodist church and his Catholic church, both located in the village of Botkins. And it seemed a reasonable compromise – that is, until the reasons why began to change.

Part of it was the funeral Mass for a beloved friend of the Schmerges. The reverence and sanctity Amanda witnessed felt so right. Certainly, part of it was her oldest child preparing for First
Communion. Amanda discovered good and satisfying answers to questions that had niggled her in the past.

Now, the Schmergesonly attend Immaculate Conception on Sundays, and Amanda’s love for the Catholic Church has only grown. She said, “It feels very comfortable and how it should be.”

Dayton: Incarnation
Even before Shannon Kelleher, one-time Methodist, married her Catholic husband, Sean, the Kellehers began attending Mass together so they could go to church as a couple. Shannon had known from an early age that, when she someday married and had children, her family would attend church together. She and Sean were serious about their relationship, so it merited the effort on her part, even though she had no particular desire to convert in the beginning.

“Especially with a big decision like this, I would never take that decision lightly. I definitely wanted to make sure that I felt like it was right for me, and that means doing my research, going to Mass and making sure that I feel comfortable and believe the same things as this [denomination] I am joining,” said Shannon.

They married and had two children who were baptized into the Catholic Church. Still, Shannon wanted to be certain she was becoming Catholic for the right reasons. The certainty she needed was taking root and growing stronger in her heart. She’d been praying and pondering, and when she and Sean made their home in Incarnation Parish, the parish community welcomed them.

Looking to meet other moms from Incarnation School, where her 5-year-old attends, Shannon joined the Catholic moms’ group feeling optimistic but unsure how they would receive her. The warm welcome she received just may have been that final nudge that led her to sign up when she heard about the new RCIA class starting in September. She knew in her heart, and without a doubt, that joining the Church was the right thing for her to do.

Cincinnati: St. Columban
Jada was baptized in a Baptist church and attended several different denominations growing up, but she heard quiet whispers from the Catholic Church her whole life. She remembers being mesmerized by the candles in the grand churches she’d seen when she was a young girl in Brooklyn, NY. When her family moved to West Chester, OH, she’d attend Mass with her friends or go to Sunday services with her family.

But for Jada, there was something special about Midnight Mass at St. Columban Church on Christmas Eve two years ago. Kneeling in reverence, she watched her now-husband and his family approach the priest for Holy Communion in an overwhelmingly beautiful Mass. She knew that this was where she was supposed to be, saying, “I felt light, like I could float. The whole experience moved me deeply.”

Jada loves her RCIA classes, discovering that much of what she believes is articulated and expounded upon in the Catechism. The more she learns, the more she wants to know. She is thrilled to be confirmed in the Church this Easter, looking ahead with eager anticipation.

Part of Jada’s excited vision for the future is having children who attend the parish school, baking treats for the parish festival with her mother-in-law, and being part of a community that works together to make the word a better place. Though, it’s much more than “community” that Jada wants. It’s communion she seeks, to forever be an inextricable part of Christ’s Body, the Catholic Church. 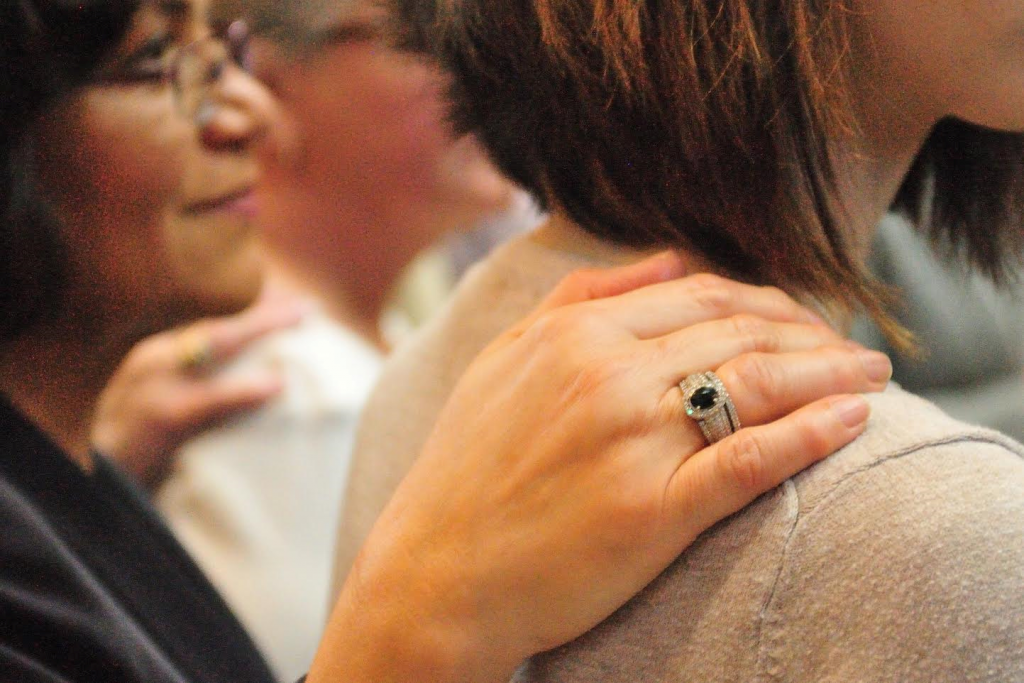