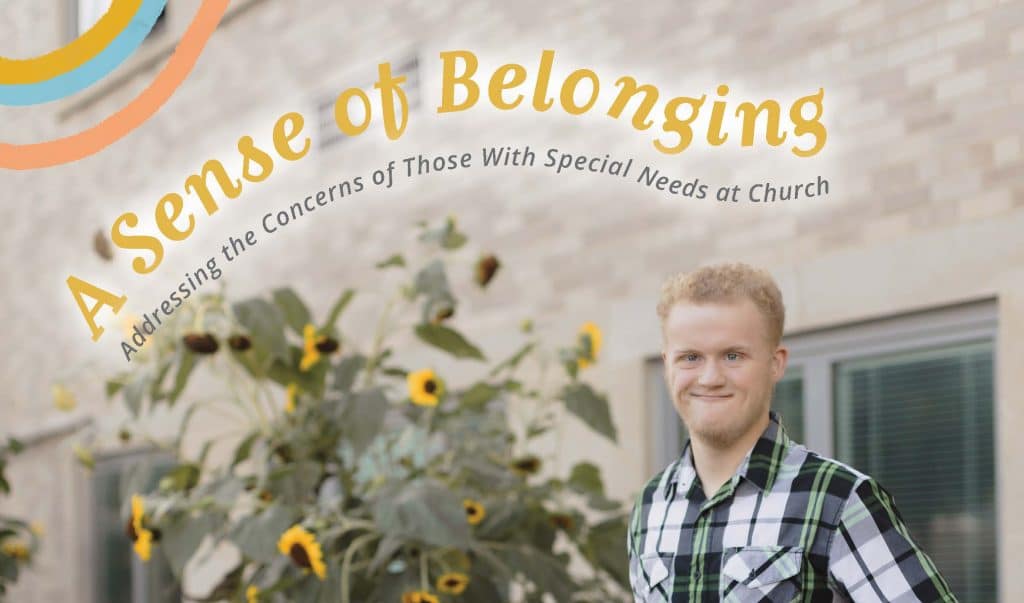 Alan Millhouse has all the interests of a typical teenager. He plays second base on his baseball team. He plays basketball, soccer and the drums. Math is his favorite subject. He has a girlfriend, loves XBOX, and is starting his sophomore in high school. Alan, 17, also has Down Syndrome.

“When they gave us the prenatal diagnosis, we were told he would probably not walk or talk and that he would be very limited,” said his mother, Dawn. “The next question was ‘How would you like to proceed today?’ That was hard to hear.”

There was never any question about how she and husband, Rob, would proceed, but Dawn admits there was a lot of praying. The couple knew they wanted as many opportunities for their son as their two older daughters had. One of those opportunities came a few years ago at their parish, St. Charles Borromeo in Kettering.

“The former usher captain came up to me and asked if Alan and I would to do the ushering,” said Alan’s dad, Rob.

They took a section of the church at 11 a.m. Mass each week. Sometimes Dawn and her daughter, Jacki, would also help. The rest of the team looked forward to seeing their new, young usher.

“Alan is big on hugging,” said Rob. “Each guy looked forward to a hug from Alan.”

The pandemic put restrictions on hugs and ushering duties like passing the collection baskets and handing out bulletins. Alan hopes that will change soon. In the meantime, he continues to be part of his parish youth group and a member of the Columbian Squires, the youth organization of the Knights of Columbus.

The Archdiocese of Cincinnati created The Office for Persons with Disabilities in May of 2020 to help parishes address concerns of those with special needs. Autism, intellectual and developmental disabilities, blindness or vision impairment are some its main focuses. Plans are for deaf ministry to eventually have its own accommodations. The goal is to not only include people with special needs, but to really make them feel welcome and comfortable.

“Inclusion has been the big buzz word for a really long time and it’s important,” said Noelle Collis-DeVito, Associate Director for the Office for Persons with Disabilities. “I like to go one step further and say that we’re trying to foster a sense of belonging. Because, inclusion means you have a place at the table but belonging means that your voice is heard.”

The office can guide parishes on how to prepare those with special needs for receiving the sacraments. It can provide resources for families on where to find adaptive missals, fidgets and manipulatives with religious themes.

A few parishes now offer sensory-friendly Masses. The lights are lower, music not as loud, the readings come from the children’s lectionary and homilies are shorter. There is no clapping and low- gluten hosts may be offered. St. Francis of Assisi in Centerville, St. Henry in Dayton, St. Christopher in Vandalia and St. Albert the Great in Kettering all offered sensory- friendly Masses pre-Covid and plan to resume them.

St. Maximilian Kolbe parish in Liberty Township has a separate room in the church where families
can sit to watch a live-stream of the Mass. Parents who feel their children aren’t ready for the big sanctuary are welcome to use it. The room hasn’t been used since the pandemic as many of those families haven’t returned to worship in person.

“It’s a room where they can feel safe, comfortable and enable them to generate this kind of community within these families so these children are able to have friends,” said Mary Ella Wielgos, Pastoral Associate for Worship and Sacraments at St. Maximilian Kolbe. It was a beautiful thing.”

A RESOURCE FOR OTHERS

The Millhouse family is grateful to the people who came before them and made it possible for Alan to be part of the community. They’ve become a good resource for other families with Down Syndrome children. The family is constantly reminded of the value of their son’s life, sometimes in the least likely of places.

A favorite memory is when 4-year- old Alan approached an elderly man in a donut shop, who clearly wanted to be left alone.

“Alan locked eyes on him and is dead set on sitting next to him,” recalled Jacki, Alan’s sister. “By the end of the day Alan was sitting on his lap, having a good conversation. The old man comes up to my mom and says, ‘Thank you for your son. This was the one-year anniversary of my son’s death.’”

Those working to create a stigma- free environment in church say it’s important to focus on the gifts people with disabilities have to offer and make it possible for them to share them. Alan’s mom says she sees the value in many small things and appreciates that now Alan can help inspire others, just by being Alan.

“It’s neat to see the impact he has on the world,” said Dawn.

For more information on creating a sense of belonging in your parish, contact Noelle Collis-Devito at [email protected].