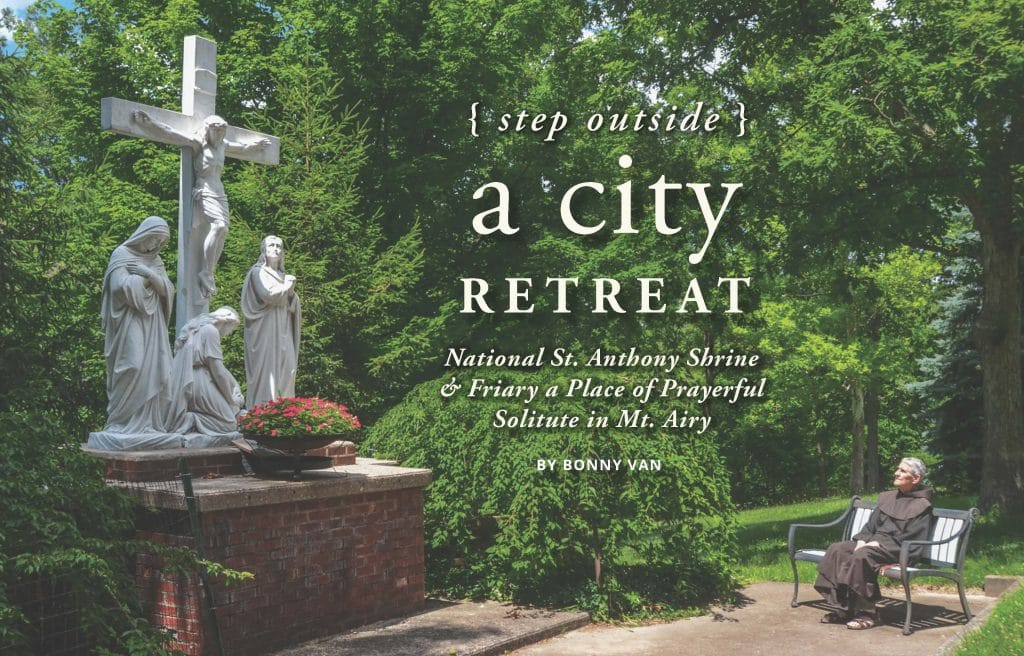 High on a hill overlooking the city of Cincinnati, many find refuge and the ability to converse with our Lord at the National St. Anthony Shrine and its property. Brother Vince Delorenzo, OFM, its Guardian and groundskeeper, sees firsthand the impact of its surroundings on visitors.

“We have 60 acres and most of it is wooded. We sit up on a hill across the street from Mount Airy Forest, so we have lots of woods across the street from us, as well,” said Brother Delorenzo. “We’re in the city, but you would never guess that because we have all the grounds around us and we have woods around us. So it’s very peaceful and quiet up here, that’s why people love coming here. We have lots of animals – we have deer, turkeys, some foxes, lots of birds. It’s a very peaceful place to be.”

Although it is now well within city limits, the journey to it remains quite an adventure. “It’s on a rather long road that goes uphill for at least a mile,” said Father Farris. “It’s called Colerain Avenue, and now it’s a four-lane road, it’s very busy. But to get to the shrine, you’ll continue going uphill until you reach a point where you’re in front of the shrine building. Now the chapel is only part of the building-setting. There’s a large Franciscan residence, we call them friaries, attached to the chapel.”

The friary was originally used for novices in their early stages of training and formation to become Franciscan priests and brothers.

“It’s a time of solitude, being apart from normal society,’’ he said. “However, in 1969, the novitiate program moved out to Oldenburg, Indiana.”

The friary then became the brothers’ school, for both the ordained and non- ordained. The non-ordained, said Father Farris, spent a year or more learning trades, including carpentry and plumbing. During the 1970s, the friary also hosted an early Vatican II renewal community called the Community of Hope, featuring a “crowded and lively Mass” on Sundays.

From those busy years of formation and training to later years of ministries and movements, the shrine has remained steadfast in its mission and its community.

“We have nine friars who currently live there,” said Father Farris. “And we have a regular schedule of meals, prayers, community times, Masses and so on.”

And, there is a steady flow of visitors. Tour groups come to the shrine, whose chapel is open to the public from 6:30
a.m. – 5:00 p.m. They also spend time on the grounds where there are large statues of St. Francis, St. Anthony, Our Lady of Guadalupe, a large crucifix and a shrine to Fatima.

“You don’t have to knock to get in, you just walk in and the chapel is available for people’s personal prayers and they’re welcome to attend our Masses,” said Father Farris. “Throughout the day, you see people stopping in, lighting a candle, saying their prayers and moving on with their day.”

And for those who can linger a little longer, the outdoors calls. As winter’s dormancy fades away, spring’s new buds spur the friars to action. Using his degree in landscaping, Brother Delorenzo plants flowers on the property, and other friars plant trees and hang bird feeders.

“It’s a special place for a lot of people, and that’s what we’re here for – to have a special place for people to come and pray,” said Brother Delorenzo. “When people come here they always tell us it’s because it’s so peaceful up here and quiet. It’s kind of like an oasis in the city, if you will. And we hope to keep it that way.”

In this place, above the din of activity, there is a refuge for the brokenhearted, the lonely, the anxious, the fearful and the hopeless, where God is waiting to converse with us. And if you visit, perhaps you will experience your own spiritual transfiguration.

Why is the First Saturdays devotion called the 'unfulfilled part of the Fatima message'?