ARCHDIOCESE — The idea of a good deed has turned into a plentiful donation for a local food pantry.

Eight-year-old Preston Vickers and his second-grade classmates from All Saints School in Kenwood recently gave a portion of the gifts they received from their first Communion to the Walnut Hills Pantry.

“I just wanted to help (others),” Vickers said.


Vickers and his friends, along with his mother, Kelly, and Karen Gardner, an eighth-grade teacher at All Saints, delivered $500 worth of food to the pantry on May 7. Also taking part in the donation were Gardner’s son, Jonathan, Will MacDonald, Henry Perry, Rowan O’Connor, Peyton Bambauer, Jack Sullivan, Hudson Nuss, Michael Sidenstick and Jake Bambauer. The students took turns unloading various canned goods, jars of peanut butter and juice from the Vickers’ and Gardner’s mini-vans.

The All Saints students celebrated their first Communion on April 18. Given the parties that followed to celebrate with their families, Kelly Vickers said commemorating her son’s first Communion was about more than just receiving gifts.

“It shouldn’t be all about the presents. We come from a parish that has a lot. It makes me feel good that he understands that not everyone has as much,” she said. “Preston is fortunate to receive his education from a Catholic school.”

Kelly Vickers notified Melody Byrom, manager of the pantry and Walnut Hills Kitchen, about the donation two weeks ago. Byrom said she was surprised to receive the call.

“This is wonderful, I’m so excited. Food is so expensive these days,” she said.

Myrom told the students about the pantry after they gave their donation. The kitchen and pantry rely on volunteers to bag groceries and serve meals, she told them. They receive donations from local restaurants, bakeries and grocery stores to help keep the shelves stocked. While the items at the pantry appear plentiful, Myrom said popular nonperishable foods like cereal remain scarce.

The All Saints students asked Myrom who visits the pantry and kitchen. She replied that many people who need food are homeless or poor. The students said it is important to help those less fortunate, especially when their basic needs aren’t met.

Vickers said she chose to give to Walnut Hills Pantry because the school collaborates with the pantry on various volunteer projects.

The downward economy has increased the visitors to the pantry and kitchen, Myrom said. Fortunately, she has been able to accommodate the influx.

The kitchen and the pantry work in conjunction with the Over-the-Rhine Kitchen. The three agencies with a staff of six alternate their hours of operation to provide food and meals throughout the week and on the weekend to enable people to visit both locations as needed.

The OTR and Walnut Hills kitchens and pantry remain dependent upon their volunteers from parishes, churches, synagogues and area businesses, according to its executive director Pat Wakim. Because of volunteers, whether they serve meals or donate food, Wakim said she thanks God for their service that has allowed both locations to keep up with the demand.

Of the volunteers that have assisted the kitchen throughout the years, Bill Kenney’s commitment has been steadfast since the pantry’s inception. Known as “Mr. Bill” at the OTR kitchen, he began volunteering shortly after it opened in 1976 to help serve lunch to visitors. He takes the city bus three days a week from his downtown Cincinnati apartment to arrive before the kitchen opens. Kenney does “a little bit of everything” at the OTR Kitchen, from making sure ice water is available to handing out plastic silverware to those who visit the kitchen.

Father Tom Bokenkotter is pastor of Assumption Church in Walnut Hills and founder of the OTR Kitchen, the Walnut Hills Kitchen and the Walnut Hills Pantry. He established the kitchens and pantry to encourage and enable Catholics, Protestants and Jews in Cincinnati to work together for one common cause — to serve the poor.

“I feel this is our little contribution to the people of the world — and that’s for them to get over their past hang-ups,” Father Bokenkotter said. “We’re doing our part by bringing people together that’s where I get a lot of satisfaction.”

Father Bokenkotter is also the founder of the Tom Geiger Guest House for victims of domestic violence and their families.

For more information about Over-the-Rhine Kitchen, the Walnut Hills Kitchen and the Walnut Hills Pantry, contact Wakim at 513-961-1983, ext. 1, or visit their website at www.overtherhinekitchen.org.

Pope Francis: The saints are ‘authoritative witnesses of Christian hope’

Father Gene Contadino: A Legacy of Social Justice and Love for Christ 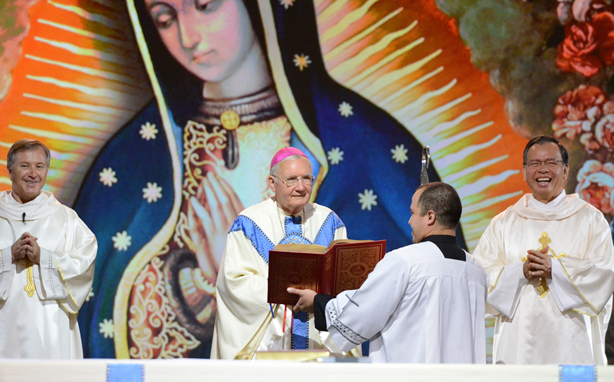