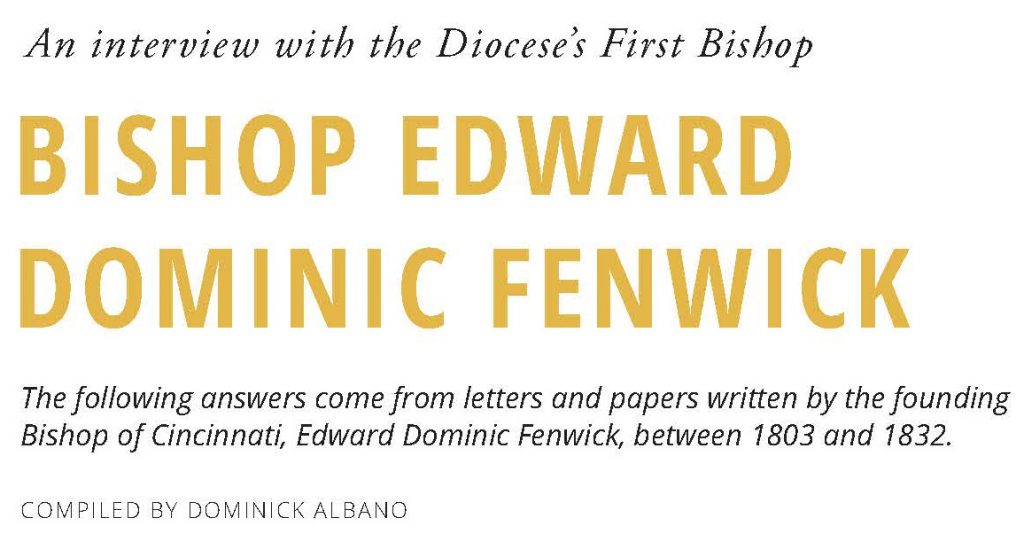 Bishop Fenwick, how did you feel when you were ordained Bishop of Cincinnati?

A dept of unspeakable gratitude calls me to the feet of the Most Holy Father at this time. While I am at a loss for words, Most Eminent Father and Patron, do you supply by reason of your accustomed kindness the words that fail me and raise me up to kiss your kind hand, for all must know to whom I owe reception of this extraordinary honour. Certainly, I would be the most ungrateful of men, and I would break the universal laws of courtesy should I ever forget so great a kindness.
(25 January 1822, 117)

Could you give us a brief overview of the Diocese of Cincinnati when you were ordained Bishop in 1822?

Ohio lies 264 miles long, and 281 miles wide, with 581,434 inhabitants, of whom 6,000 are Catholics, spread over the entire region. I entered this region six years ago as the only priest. I built a church near Somerset in 1819 in which vicinity were nine Catholic families – now there are 150. Since then, fourteen other churches have been built in different places in this region. More than 100 adults and 300 infants have been baptized. Most of the inhabitants are sober people, hard working and eager for religious instruction?
(25 January 1822, 117)

The Diocese of Cincinnati included Michigan and other Northwestern territories, like present-day Wisconsin. What were those areas like?

The Northwest Territory and Michigan lie within my diocese. Detroit, the largest city of this region, has 350 Catholic families capable of supporting three priests. In the Michigan Territory, there are now more than 1,200 Indians once converted by the venerable Marquette of the Society of Jesus. At a place called Green Bay, 160 miles from Mackinac, there are sixty Catholic families.
(25 January 1822, 118)

Do you consider it a special obligation to minister to the indigenous people in your territory?

Once Catholic, now without a priest for many years, these Indians, after an agreement made with the American government concerning the sale of their lands, have among other things recently stipulated that a “Black Robe,” as they are wont to say, be given them, of the same Religion as the Canadian one. The Americans sent a Presbyterian minister to them, but in vain, for when the Indians learned from him that he was married, they immediately sent him away. (25 January 1822, 118

How did you feel about the prospects of your young diocese?

Our little Church here is finished, and is very decent; unfortunately it is not yet paid for… Our Congregation daily increases; prejudices are wearing away; it is not possible to have a fairer prospect before us; not only no impediment on the part of the government, but on the contrary every encouragement, as our establishments are looked upon as contributing to the public utility, by diffusing religious principles and useful knowledge.
(5 December 1822, 121)

How did you feel about being the Bishop of such a geographically large diocese?

It requires nearly six months to make the visit of my Diocese of Ohio, not allowing myself more than week or two to spend in each congregation or settlement of Catholicity. Hence you will readily conclude on the necessity of a Bishop of Detroit, as I have absolutely more to do in Ohio than my abilities and circumstances enable me to do and where no provision was made, nor enquired into, for a Bishop.
(9 February 1823, 122)

The people of Ohio are generally moral, steady, and thoughtful, fond of instruction, and inclined to be religious. Their docility and respectful conduct towards myself, and all the Priests, have always afforded me consolation, pleasure, and almost vanity. (May/August 1823, 137)

What kind of challenges did you face in those first few years?

Now I am writing to Robe laying open claim to my unworthiness, my lack of knowledge, the shortage of co-workers, and the lack of temporal necessities for obtaining food and clothing. Not even a house was prepared for me wherein to dwell with my associates in my city, thus was I forced to rent a house for 200 Spanish dollars a year and, in addition, to buy a field for lactating my cathedral, if a mere chapel built of timbers can be called that. The total [financial support] that comes from my Cathedral See derives from the free will offering, or collection, which takes place after Mass on Sunday – up to two or three dollars a week. With this modest sum, I am obliged to provide for a household of seven persons as well as two horses.
(10 September 1823, 139)

What plans did you make for the young Diocese in those early years?

Near the cathedral there is a small field where I hope to build my seminary… I am going to purchase it in a few days in order to build the seminary I much desire, for without it I cannot secure anything stable and lasting. Without the seminary I could obtain some priests from Europe from time to time, but they will always be too few to suffice for the need of the Diocese… If I have a seminary I can form a native clergy already knowing the customs of the country, the difficult roads, the language, etc., and I do not have to forgo those coming from Europe… In a word, Gentlemen, with a seminary I have before the prospect of many blessings, without a seminary I see nothing for the future but distress.
(12 August 1832, page 399)

How did the diocese grow during your time as bishop?

In Ohio we have three schools conducted by Religious women who are doing much good. My college is in full operation. The seminary is a brick building with a stone foundation. It is to have a belfry to correspond with those of the cathedral and college on either side.
(12 August 1832, page 399)

How did you feel as you approached the end of your life?

I feel myself sinking under the weight of solicitude and infirmity [having] arrived at my 64th year of age “I have finished my course, I have kept the faith”, but I cannot add with confidence “there is laid up for me a crown of justice,” because man knowth not if he be worthy of love or hatred; however, I may say with truth “in thee, O Lord, have I hoped, let me never be confounded.” I hope you think of me sometimes in your prayers.
(13 August 1832, page 400)

If you were not bishop, what kind of ministry would you like?

We had a procession of the Blessed Sacrament on that day after Mass with as much order and decorum and piety as I have ever seen in Europe at such events. I believe that there was more piety, faith and veneration as have ever been seen in similar circumstances among American Catholics. Finally, my dear friend, I can say that this was the most beautiful day, the most consoling day, that I have experienced since I have been a Bishop. I would gladly exchange my place in Cincinnati and all my honours, etc. for a cabin here in order to aid these good Indians.
(3 June 1831, 347)

What achievements are you particularly proud of?

Our college in Cincinnati is in complete operation, excepting the philosophical department, for which the apparatus long expected is not yet arrived. Our seminary which unites college and cathedral contains thirteen seminarians preparing for Holy Orders, all seculars, as those establishments are secular. We have a printing press and a weekly paper entitled The Catholic Telegraph of Cincinnati. (1 December 1831, page 362)

'Eucharistic Revival' to begin in 2022: 'We want to start a fire, not a program'