Kettering OH – The Alter High School Conservatory of the Arts building is complete, and an official ribbon cutting and open house will be held this Friday, May 11th at 10 am. The opening ceremony will be led by Principal Lourdes Lambert, Father James Manning, Kettering government officials, and naming partners, Mrs. Christine Connor and Mrs. Marlene Miller. Alter students, benefactors, parents, neighbors, and friends will also be in attendance. An open house will be held until 2 pm for the public. This $5.3 million building extension began construction last May at the end of the 2017 school year. Thanks to the amazing organization and management of the contractor, R.L. Fender, and designer, Moda4, the new facility will not only open on schedule, but will serve as a beautiful new facility in Kettering.

The new building will feature a 236 seat theatre, an art gallery and classroom, a two-story band and music room, a dance studio, and many other amenities. The new building connects to the main school building near Seton Hall and features a breezeway to walk through from the front of the school directly to the rear parking lot. This wing will be the new home of the Alter High School Conservatory of the Arts, which was founded in 2009 and is the only program of its kind in the Archdiocese. The purpose in these updates is to provide facilities that match the quality of the arts programming at Alter High School. Todd Tucker, Director of Music, added that, “We have worked extremely hard to elevate the fine arts department at Alter to offer our students first class music, theatre, dance, art education and experiences. Now our students and faculty will have the first-class facilities that they deserve, to not only meet our standards, but take us into the future.”

The new Arts Wing is named the Christine Connor and Fred J. Miller Conservatory of the Arts. Mrs. Connor is the wife of Alter Hall of Fame Inductee and Alum Larry Connor ‘68. She has a life-long appreciation of the arts, is an artist herself, and is a dedicated supporter of youth education and the special needs population in the Dayton area. Mr. Miller was a champion for the arts. He was a Band Director for both Fairborn and Alter High Schools, he created the Miller’s Blackhawks Twirling and Musical Corps, and he founded the local company FJM Inc., which manufactures and sells marching band uniforms.

The Conservatory of the Arts building completes the facility improvements of a capital campaign that began in 2008. Since the inception of this campaign, Alter has renovated its Chapel, Science and STEM Labs, Chef Lab, and converted the existing athletic practice areas into updated turf fields. Principal, Lourdes Lambert stated that, “The renovation of the Chapel mirrors our commitment to spiritual development, the state-of-the-art Science and STEM labs reflect our commitment to a 21st century educational model, and the turf fields enable our state championship winning teams to practice and play in a facility that matches their level of excellence. The culminating project of the Arts Wing will continue to allow us to educate the whole child, and encourage each student to be their best selves in all areas.”

Lambert also added, “On a broader scope, our hope is that this one-of-a-kind Conservatory will be used by the entire Alter Community 52 weeks a year. Speech classes, guest speakers, adult lecture series, ‘Alter-Ted’ Talks, family movie nights, receptions, VIP events, scholarship awards and reunions are just some of the ideas that have been discussed.” Highlights of the new Conservatory of the Arts include the following details:

Theatre
• Theatre has a thrust stage which puts the patrons “around the performers”
• Furthest seat from stage in the theatre is 30 feet; closest seat is 6 feet
• Two guest suites that can accommodate 20 additional patrons
• Special telecommunications allow for the orchestra pit to perform from another room in the Arts Center and still see and hear everything that is going on in the theatre
• LED Lighting system design comparable to those found in large metropolitan theatres
• ADA listening system for hearing impaired 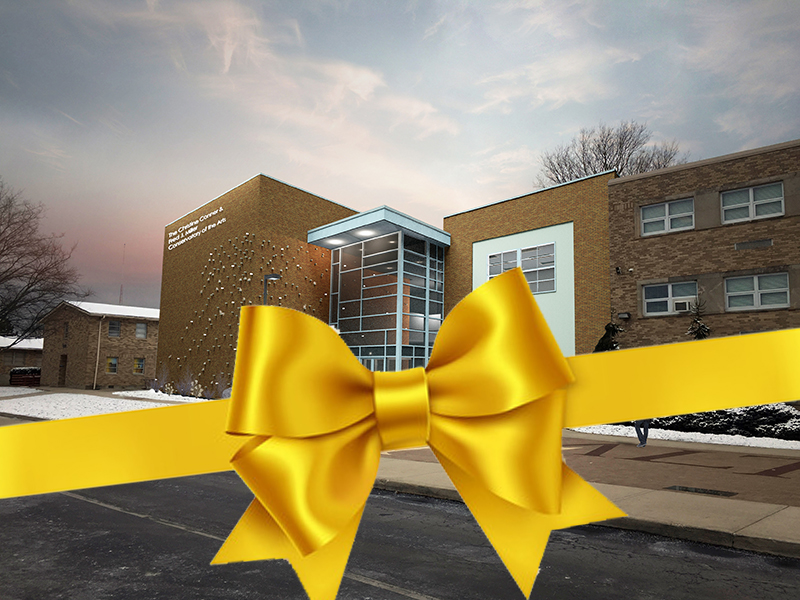 Ken Burns: Christophers 'generous' to give him Life Achievement Award

Islamic State might get ousted, but Christians still worry about safety