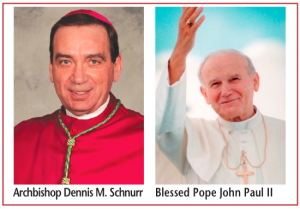 Archbishop of Cincinnati Dennis M. Schnurr released the following statement Friday, July 5 in response to news that Blessed John Paul II had been cleared by Pope Francis for canonization.

“When Pope John Paul II died on April 2, 2005, the cry immediately went up from the crowd in St. Peter’s Square of “Santo Subito” – “Saint Immediately!” In preparing for the 1993 World Youth Day in Denver, of which I was the director, I met with Pope John Paul many times. In addition to resolve, kindness, a sense of humor and many other fine qualities, I observed in him that sanctity which the crowd proclaimed.  I am grateful that the Church’s careful process of canonization has confirmed what we all felt in our hearts.”