The Catholic Telegraph 2011-01-20
The Catholic Telegraph / January 20, 2011 / 1.4k
0
Shares
Facebook Twitter Pinterest WhatsApp
Thursday, January 20, 2011
By David Eck
ARCHDIOCESE — A renewed effort by the archdiocesan Family Life and African-American Catholic Ministries offices aims to reduce the number of abortions in the African-American community.
A recent program for volunteers at area pregnancy help centers addressed working with minority clients and materials on the issue will be distributed at the Archdiocese of Cincinnati’s Forum on Race at the University of Dayton. Jan. 28-29. Plans are also being made to bring Deacon Al Turner, director of the Archdiocese of Washington’s Office of Black Catholics, to speak in the Cincinnati Archdiocese later this year. Deacon Turner’s message is that addressing abortion is one the most important issues facing the African-American community.
The number of abortions in the African-American community is typically much higher than with Caucasians. In Ohio 41.7 percent of all abortions are on performed on Africa-American women, yet they make up only 12 percent of the female population, according to 2008 statistics from Ohio, the latest figures available.
“We’ve lost generations of people,” said Deacon Royce Winters, director of the archdiocesan Office of African-American Catholic Ministries. “We’ve lost great minds and lives simply because people didn’t see a viable option other than taking this life.”
The local initiative builds on a message that Bishop Martin D. Holley, auxiliary bishop of the Archdiocese of Washington, has spread for several years. In 2008, Bishop Holley, an African-American who was born to a family of 14 children, wrote of the impact abortion has had on the African-American community in A Reflection of the African American Family and the Culture of Life for the United States Conference of Catholic Bishops.
“In my own homilies I have often referred to African Americans as an endangered species,” he wrote. “Abortion is currently taking a deadly toll on pregnant black women because abortion facilities, which promote the culture of death, seem strategically placed in or near African-American neighborhoods to make abortion easily accessible, especially to the poor.”
Bishop Holley wrote that more than 13 million African-American lives have been lost to abortion, which is more than a third of the 2008 African-American population. More than 1,450 African-American children are lost daily to abortion, he wrote.
While pregnancy help centers in the archdiocese have been working with pregnant women for more than three decades, the bishop’s message provided new emphasis for their work with minorities.
“Since that came out I think more people are addressing it from his standpoint,” said Mary Anne Boyd, respect life coordinator for the archdiocesan Family Life Office. “You’ve got a credible voice in the church that has done something with it. When you have that, it gives you a lot more credibility to go out to our pastors or coordinators in those parish settings.”
Cincinnati archdiocesan leaders are working with social service agencies, pregnancy center directors and volunteers to spread the message, Winters said. Using African-American voices and images is also important because it gives the message more credibility in the African-American community, he added.
Kay Brogle, who runs Healthy Moms and Babes, a Catholic outreach ministry for pregnant and parenting women and families, agrees.
“What I think is important is to meet people where they are and who share common backgrounds and experiences. Our staff is very racially mixed,” she said “Our staff represents the diversity of the people we are working with.”
There are more than three dozen pregnancy help centers in the Cincinnati archdiocese and many of them service a clientele that’s more than 50 percent African-American, depending on location.
A goal of the centers is to provide all their clients with detailed information about parenting and adoption. Centers can provide pregnant women the resources they need to carry their babies to term, including medical care, help with government benefits and schooling, Boyd said.
At Birthright of Greater Cincinnati, the oldest pregnancy help center in Greater Cincinnati, clients are supplied with medical resources, baby supplies and education programs. Clients are also encouraged to use their public library’s internet connection so they can learn of additional resources.
If a client is thinking about making an adoption plan, Birthright connects them with experts who can answer their questions. If the client wants to consider adoption, Birthright arranges for them to develop a relationship with other clients who have made such plans for their own babies.
“We’re here to offer emotional support and information, and also be their friend,” said Chris Schuermann, executive director. “We’re all about making good choices. It’s not just one choice. It’s lots of choices.”
Women who are unexpectedly pregnant or feel overwhelmed need to know there’s a support system in place that can enable them to deliver their baby and help them raise their children during the early years.
“We have to start at a place where we’re providing some of the answers,” Winters explained. “It’s not as if people don’t know that abortion is evil or wrong. It’s that there hasn’t been this concerted, intensive effort to reach the masses of people who can use their prophetic voices to make an impact on these kinds of choices.”
David Eck can be reached at [email protected].
Tags:African-American Catholic Ministries
Previous post

Today’s Video: Confession is a Place of Victory 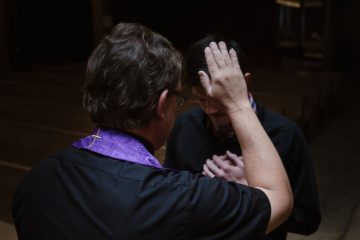