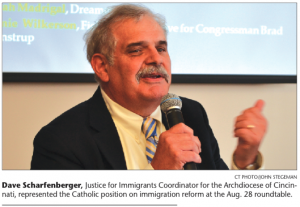 Leaders from business, faith and law communities came together Aug. 28 for a pair of roundtable discussions on immigration at the Freedom Center in downtown Cincinnati.

The event was sponsored by the Bibles, Badges, and Business (BBB) network, an alliance of conservative business, law enforcement and religious leaders who advocate for immigration reform.

The Archdiocese of Cincinnati was represented in the afternoon session by Justice for Immigrants Coordinator Dave Scharfenberger and by Director of the Catholic Social Action Office Tony Stieritz in the evening session.

Scharfenberger spoke of the church’s historical commitment to ministering to immigrants. The United States Conference of Catholic Bishops has called for Immigration reform that: provides a path to citizenship, preserves family unity, provides legal pathways for low-skilled workers, restores due process for immigrants and addresses the root causes of migration.

Besides the religious and moral imperatives behind immigration reform, several members of the panel discussed the situation in economic terms.

“There is a strong business case to be made for immigration reform…,” said Tom Ewing, member of the Cincinnati Chamber of Commerce. “The opportunity to make constructive changes to how our system works is really a singular opportunity. It is something that our economy needs to address right now. We hope that congress will move on the momentum that has started on the Senate side.”

In materials handed out at the event, the BBB included a synopsis of Senate Bill 744, which includes provision allowing most undocumented immigrants an opportunity to apply for legal status that could eventually lead to citizenship. Additionally, the proposed legislation includes merit visas, changes in family-based immigration laws, employment-based immigration, a separate pathway for agricultural workers and more.

The panel’s resident CEO talked about the difficulty his company and others in the landscaping and nursery industry have in finding workers. He said legal immigrants aren’t taking jobs Americans would take.

“We have not been able to find American citizens that are willing to work outside, doing manual labor for eight or nine months a year, and that’s what our business requires,” Natorp said. “And those few that we are able to hire typically leave after a couple weeks or we have to terminate them because they aren’t dependable.”

A question-and-answer session turned contentious as trio of individuals who claimed to oppose much of the proposed immigration reform stated their viewpoints. The three men, one of whom self-identified as a Catholic, claimed that illegal immigration has devastated American families. Another member of the group said the solution to immigration issues is for people to stay and flourish in their own countries. Their remarks drew heated responses from Alfonso Cornejo, President of the Hispanic Chamber of Commerce, among others.

“People have a right to a decent life where they come from,” Scharfenberger said in response. “I think we all agree with that. We live in a world where that is not happening. People have always migrated to find a better life… No one is saying we should just have open borders. There is recognition that we have to have some control over our borders. The question is what are those controls, what is reasonable and fair?”

Zayas-Davis, who also serves on the board of directors for Catholic Charities, said that openness to immigration, which is a key aspect of the propose reforms, is something that will serve the interests of the United States going forward.

“If you look at the history of our country,” she said, “whenever we have been open to immigration, that has been followed by a moment of prosperity in our country.”