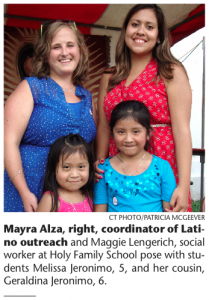 If you ask Geraldina Jeronimo, 6, what she likes about the first grade, she will tell you “reading and writing.” When prompted, she adds, “recess.”

Geraldina attends Holy Family School in Price Hill and her parents are thrilled she’s there. “It’s very important because she is starting a Catholic education at a young age,” says Geraldina’s father, Eulalio Jeronimo, through an interpreter. “When they are older they will have a big knowledge of the faith,” he adds.

Geraldina’s cousin, Melissa, 5, is in kindergarten at Holy Family where she says she “likes to color.”  Her father Marco is “very happy to have the kids in the school,” referring to Holy Family.

That the cousins are attending Catholic school at all is due to the stepped up recruitment efforts by the Archdiocese of Cincinnati and more specifically the work of Mayra Alza, who is the coordinator for Latino outreach for the archdiocese. She finds Catholic, Latino families and introduces them to the possibilities of a Catholic education. She found Geraldina and Melissa, both daughters of Guatemalan immigrants, at Head Start in Camp Washington.

For a population that is overwhelmingly Catholic, Alza says many immigrant families don’t realize a Catholic education is an option. “A lot of them don’t know where to find the information,” says Alza. So she meets the families on their turf — at church, at neighborhood centers and festivals — and shares knowledge of the local Catholic schools.

And, until she came on board, there was no real plan in place to attract Latino students. When the archdiocese reviewed the data it collected on who was attending Catholic schools it found it was not successful in attracting Latino students. Rigg says there was a lack of marketing but also a cultural barrier.

Alza is able to “breach the cultural and linguistic barriers in reaching out to that population,” says Rigg.

Alza is from Peru, coming to the United States at the age of 15. Her position is paid for by a grant from the SC Ministry Foundation. Since she was hired two years ago, Latino enrollment is up 108 percent. There are currently between 95-100 recruited Latino children in archdiocesan schools. St. Clement in St. Bernard, Holy Family and St. Lawrence in Price Hill and Our Lady of the Rosary in Dayton have the largest populations. St Cecelia in Oakley saw a surge this year. Many of the children attend the schools with the help of Ed Choice vouchers or receive tuition assistance from other sources.

“The most successful strategy is word of mouth,” says Alza. “The families are happy with us, they are comfortable.” Alza gains the trust of the parents who speak limited or no English and also helps them navigate the school system.

“I think the families have been great to work with,” says Rigg. “The kids are bright and eager to come. They’re enthusiastic. Once we have them in the schools they are wonderfully supportive presences in the community.”

Maggie Lengerich is a social worker at Holy Family and she would agree with that, especially when it comes to the little Jeronimo cousins. “The moms are so involved and the little girls are so good in class,” she says.

The cultural center of the Catholic Hispanic population in Cincinnati is San Carlos Borromeo Catholic Church. It does not have a school and neither do some other parishes with a large immigrant population. Holy Family is an exception. Thirty-nine Latino children are now enrolled in school there and Mass is now said in both English and Spanish on Sundays. A positive step, according to Rigg, and one that is the beginning of a longer journey.

“Our schools were founded upon an immigrant population,” he said. “We need to make sure properly poised to serve next great immigration population.”

This article originally appeared in the October 2013 edition of The Catholic Telegraph. 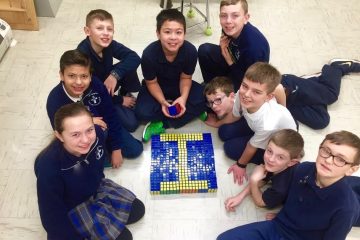