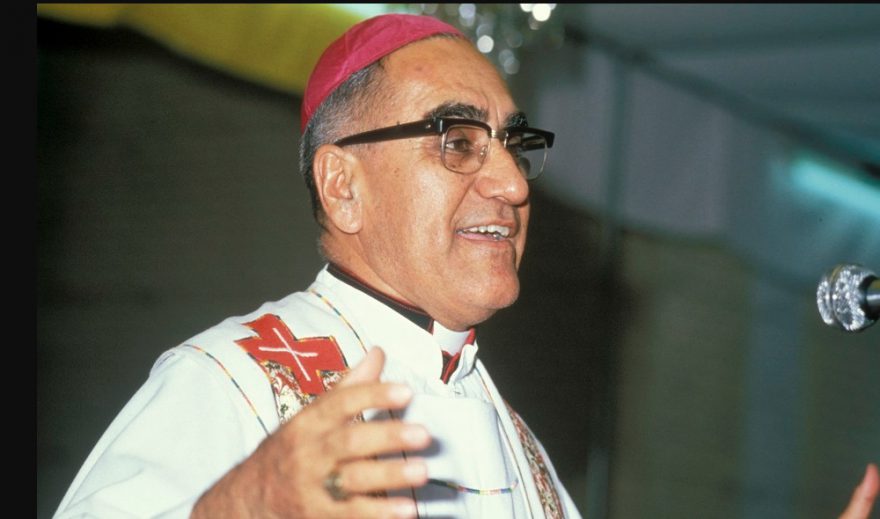 When the canonization ceremony for Blessed Oscar Romero, Archbishop of San Salvador, is held in Rome on Oct. 14, Catholics in the archdiocese will be among those celebrating.

Archbishop Romero, an outspoken advocate for the poor, was shot and killed March 24, 1980, as he celebrated Mass in a hospital in San Salvador during his country’s civil war. His sainthood cause began in 1993, and continued for years as church officials combed through thousands of documents related to his life. The effort began moving forward under Pope Benedict XVI. In May 2007, he said: “Archbishop Romero certainly was a great witness to the faith, a man of great Christian virtue.”

Pope Francis placed the archbishop firmly on the sainthood track, formally decreeing in February 2015 that the archbishop was assassinated as a martyr for the Catholic faith. He then authorized his beatification, the last step before sainthood, in May of that year.

The Salvadoran cleric’s canonization is especially meaningful for members of St. John the Baptist Parish in Harrison, which has a 15 year twinning relationship with two parishes in El Salvador: Our Lady of Guadalupe and Santa Cruz. Representatives from each faith community have visited their brothers and sisters in faith numerous times over the years, including as recently as Aug. 6, when a contingent from El Salvador came to the archdiocese.

Deacon Don Meyer admits that he wasn’t initially aware of Blessed Romero’s assassination, but learned of the archbishop’s life and death when he and his wife, Kathy, visited their son, a Maryknoll lay missioner who served in El Salvador from 2000-2003.

“I learned he how had sacrificed his life for the poor and marginalized in his county, how he had become a voice for the voiceless, and how he stood up against an oppressive government and challenged the wealthy and the soldiers who were killing and torturing their sisters and brothers to conversion of the heart — to live in the justice, love and peace that the words and example of Jesus show us,” Deacon Meyer said. “Every year during our visits from St. John the Baptist in Harrison to our sister parishes there, we celebrate Mass in the chapel where he was assassinated.”

Several years ago, a Salvadoran friend gave Deacon Meyer a very small picture of Blessed Romero that he now wears on chain with a cross to remind himself to “remain in solidarity with my Salvadoran sisters and brothers, to be a voice for justice and peace, and to be always willing, as he was, following in the footsteps of Jesus to give totally of myself to others.”

Mario Ramirez, a member of a parish that twins with St. John the Baptist, shared his thoughts on what the canonization means to the people of El Salvador. “We are united in joy as a church since this current generation that will have its first Salvadoran saint. He was someone who walked through our land sowing the seeds of hope. His words echoed in our history as he talked about responsibility and commitment. He was a man of faith guided by the Holy Spirit who transformed our reality, a man that few understood and comprehended,” Ramirez said. “As a church, we are at the gates of the reward [of a canonization] that comes from on high, a gift of God.

“Today heaven and earth rejoice in a total joy because another of Romero’s phrases has now become so significant: ‘If you kill me, I will resurrect in the Salvadoran people.’ This is the resurrection for our people today because it confirms for us that which we already considered holy. For our church, he will no longer be just an American saint, but Saint Romero for the world. God bless you, El Salvador. God bless the whole world!”

The soon-to-be saint has an also been an inspiration to Father Jeff Kemper, pastor of St. John the Baptist. “He inspires me to seek to be a man and priest of integrity, that is, to strive to present the Gospel without compromise, to present it whole and entire without omitting what is uncomfortable, what others see as mere options in living the faith, and without omitting who is meant to be served by the church,” Father Kemper said. “I certainly have not achieved this in my life, but I strive for it. This saint’s ministry and life remind me, paradoxically, that we do not live for the here and now, but it is in serving the world here and now that we move toward the fullness of the Kingdom that is beyond this world.”

A Prayer Service and celebration marking the canonization will be held at Bellarmine Chapel on Xavier University’s campus on Oct. 14 at 1 p.m.