The Archdiocese of Cincinnati has established an Office of the New Evangelization within the Department of Educational Services and appointed Sean Ater as its first director, starting July 1.

“This office will be charged with fostering a culture of evangelization amongst our parishes, schools, ministries, and central office functions for the Archdiocese,” said Dr. Jim Rigg, Director of Educational Services and Superintendent of Catholic Schools.

“Through trainings, resources, and initiatives, this Director will help promote a culture of evangelization that should permeate throughout our Department, our central offices, and into the parishes and ministries that we serve.”

“Evangelization has always been the central mission of the Church,” Ater said. “The Church exists to evangelize. “The ‘new’ in the New Evangelization calls the entire Church to confidently and with a new ardor seek out new expressions and new methods for proclaiming the Gospel. I am excited and grateful for this opportunity to work with others in this central task of the Church.”

He holds a Master’s degree in Pastoral Ministry and a Bachelor’s degree in Religious Studies, both from the University of Dayton.

The Roman Catholic Archdiocese of Cincinnati is the 38th largest Catholic diocese in the country, with almost 500,000 Catholics, and has the sixth largest network of Catholic schools in terms of enrollment. The 19-county territory includes 214 parishes and 114 Catholic primary and secondary schools.

Bible in a Year: Have you heard about Father Mike Schmitz’s next project? 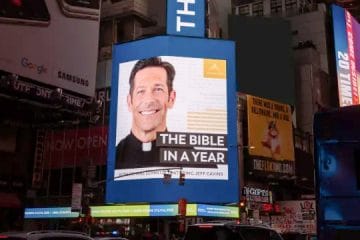