The school year was only a few days old when it was announced that freshman Kyle Bergen was battling Hodgkins lymphoma and had lost his hair because of treatment. To help Bergen feel comfortable in his new school, male students lined up during lunch Sept. 7 to have their heads shaved. Four female students and two staff members also went under the shears.

The effort began when 23 members of the Badin freshman football team showed up at school with shaved heads. Bergen was planning to play football in high school before being diagnosed with cancer in the spring.

“It literally brought tears to my eyes,” said Badin counselor Angie Bucheit. “It’s special to see students do these things from the heart. These are the kind of bonding events that make a school a school.”

Badin freshman Katherine Schindler, one of the girls who participated, said the school quickly reached out to Bergen, even though he and his family were new to the high school.

“I met Kyle the second day of school,” Schindler said. “There was a perfect opportunity for me to show my support [for him] and so I took it.”

Students participated in a local Light the Night Walk in September, raising $1,300 for the Leukemia and Lymphoma Society. Students from rival schools also joined the walk on Bergen’s behalf.

“We talk about family at Badin High School and there’s a great example of it. Our students have great solidarity with Kyle,” said Dirk Allen, communications director at Badin. “It’s exactly what Catholic schools are about.”

Badin has arranged for Bergen to participate in classes via a webcam when he can’t leave home. The technology enables him to take notes, answer questions and see the board. Bergen has even tuned in from the hospital.

“This is, to me, where the school is addressing the whole child,” said his mother, Caron Bergen. “What a gift that is to help him succeed in the best possible way he can.”

The family learned had heard about Badin’s community atmosphere but they never realized its depth.

“Everyone is so supportive. They’re always there for you,” Kyle Bergen said. “The teachers at Badin have been extremely helpful. They’ve given me as much time as I need to make [work] up.” Classmates have taken notes for him, he added.

Because of their efforts, he said, he doesn’t feel alone in fighting his illness.

Bergen has also has also found support at Mother Teresa Catholic Elementary School in Liberty Township, from which he graduated last spring. Mother Teresa students raised money, sent treats to the Bergen family and are working to help patients at Cincinnati’s Children’s Hospital Medical Center in Bergen’s name. The student body prays for him every morning.

Last January Bergen first noticed a lump on his collarbone. An initial biopsy was negative, but in June, shortly after he graduated from grade school, he was diagnosed with Hodgkins lymphoma.

The Bergen family has been awed and overwhelmed by efforts of the schools, their friends, and, even, Cincinnati Archbishop Dennis M. Schnurr, who sent Kyle a note last week.

“We saw the body of Christ in action,” Caron Bergen said. “Everybody steps in and does for us when we can’t do it ourselves.”

Sunday Scripture: Pray without giving up 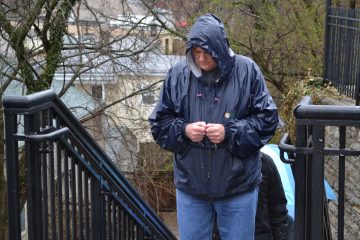