Before he was a saint, then-Cardinal Karol Wojtyla of Kracow, Poland, visited Joseph L. Bernadin  Sept. 2, 1976, while the latter was Archbishop of Cincinnati.

Cardinal Wojtyla would become Pope John Paul II. He instrumental in the sweeping changes that came with the fall of the Berlin Wall and the lifting of the Iron Curtain from his native Poland. Pope Francis canonized John Paul II April 27 along with Pope John XXIII, instigator of the Vatican II Ecumenical Council.

As Karol Wojtyla/St. John Paul II is now officially recognized as a saint, certain object associated with him could now be considered relics.

Those include the bed he slept in when he stayed at the Cathedral of St. Peter in Chains and the chalice and paten he gave Archbishop Dennis Schnurr as a gift for his work organizing the World Youth Day in Denver in 1993.

That chalice and paten are currently on loan an on display at the Athenaeum of Ohio.

This story originally appeared in the May 2014 print edition of The Catholic Telegraph.

15 quotes from St. John Paul II on his love for the Eucharist

The Rome church where you can venerate St. Valentine’s skull 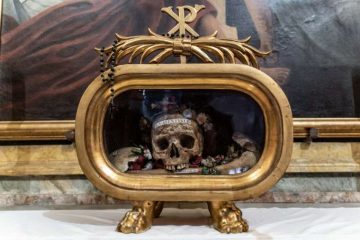