Harold had a good job and a master’s degree in India, but an employer promised him a much better job in the United States so he jumped at the chance. Upon arriving in the U.S., the employer asked him to turn over all his identification documents and cash for safekeeping. At first, he was told the good job and a nice house were coming, that he just needed to be patient and work temporarily in a restaurant. This quickly turned to working long hours under the threat that he would be arrested if he tried to escape, since he had no money and his trafficker had his papers. He and his family continued to be exploited and abused for nearly 2 years.

Labor trafficking appears in many forms, and Harold’s is one local example. I spoke with Tonya Folks, human trafficking liaison at the Montgomery County Sherriff’s office, who explained that labor trafficking is “recruiting, harboring or exploiting someone’s labor through force, fraud or coercion.” You don’t need to hold someone by gunpoint. All you need to do is exploit a vulnerability. Holding someone’s legal papers is one way, but it can happen to US citizens as well.

Anne was an elderly woman living alone on social security. After a couple got to know her, they offered to let her live with them if she turned over the rights to her checks, promising to let her keep $300 a month spending money. It seemed like a great deal to Anne. She quickly discovered, however, that they had no intention of ever giving her any money, and made her work harder every day with less access to food. She never left simply because they had her identification, her money, and she had nowhere to go.

I also spoke with Christina Back, an immigration and family law attorney. She told me that trafficking can be very difficult to prosecute. For starters, it is a new area of law that only began around 2000. Because it is new, differing charges are typically cross-jurisdictional, thus requiring more resources. It can also be difficult to prove coercion, especially if the victim was so manipulated they don’t even see it as against their will or are too fearful to testify. Samantha Searls of the Intercommunity Justice and Peace Center added that because trafficking is so difficult to prosecute, law enforcement often resorts to finding something they can more easily charge—like a health or fire code violation—in order to get victims out of the situation. The difficulty with that, however, is that traffickers just pay a fine and open up shop somewhere else.

What can we do? First of all, look for signs. If employees arrive and leave together in the same vehicle, or show signs up sleeping at the place of business, these are red flags. If employees are unwilling to engage in any conversation about how they like their job, that could be another red flag. If you do suspect trafficking, call the National Trafficking Hotline at 1-888-373-7888, or especially with foreign nationals, the Department of Homeland Security’s tip line at 866-347-2423. Either way, it is not a problem if you report something that isn’t an issue, but you could be saving a life.

This is not the end of the story. To watch the interviews with Harold, Tonya, Samantha and Christina, head to www.catholiccincinnati.org/being-pro-life, to find more resources on how to help. Together, we can be more aware of the signs of trafficking, and help put an end to this hidden injustice that plagues our communities.

For Last Month’s Being Pro Life, The Dignity of Humanity behind bars, click here

Commentary: Ordination amid coronavirus - A call for humility and courage

Ordination Week, looking back at the late 60’s early 70’s 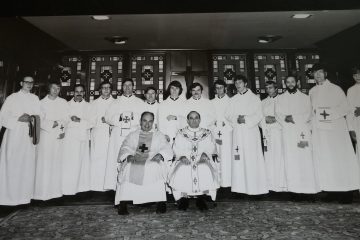