Cardinal Raymond Leo Burke, Patron of the Sovereign Military Order of Malta and former Prefect of the Supreme Tribunal of the Apostolic Signatura, was the keynote speaker May 11 at the Sacred Heart Radio 15th Anniversary Banquet at the Sharonville Convention Center.

His Eminence spoke for 40 minutes, reflecting on the Gospel of Life and Catholic radio, inspired by the Pope St. John Paul II’s encyclical of the same name, Evangelium Vitae.

“One of the aspects of the new evangelization in which Catholic radio is playing a key role is in the proclamation of the Gospel of Life,” Cardinal Burke said. “The Gospel of Life is, in fact, in the words of Pope St. John Paul II, at the heart of Jesus’ message. In coming to you tonight, at a time when our culture reflects more and more a loss of respect for the inviolable dignity of innocent and defenseless human life, and for the integrity of it’s cradle in marriage and family, I thought it appropriate to reflect on the Gospel of Life and Catholic radio.”

The event, attended by roughly 600 people, celebrated the founding of Sacred Heart Catholic Radio in 2001. The station is now available over the airwaves at 740 AM, 89.5 FM and coming this June, 910 AM.

“Radio accompanies us throughout the day and is often the vehicle by which we receive comfort, inspiration and strength,” Cardinal Burke said. “It is fitting that your Catholic radio network bears the name of the Sacred Heart of Jesus for it is from the glorious pierced heart of Jesus seated at the right hand of the Father that every grace of the Holy Spirit comes into our hearts.”

The banquet included a social hour where patrons had the opportunity to meet the cardinal, who spent much of the evening smiling for photos and blessing those who waited to meet him. At the end of his talk, Cardinal Burke invoked a blessing on all supporters of the station.

“Christ gave the Blessed Virgin Mary, his mother, to his disciples as their mother and she is constantly drawing hearts to her immaculate heart, so that with her, faithful disciples may give their hearts totally and forever to Christ,” he said. “Calling upon the intercession of Mary immaculate, I invoke God’s blessing on Sacred Heart Radio and all who support this most important apostalate.”

Cardinal Burke is the third cardinal to visit the Archdiocese of Cincinnati in the past two months. 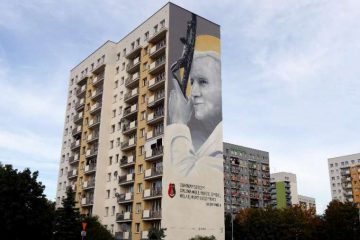