NEW YORK (CNS) — To those who ask why the Catholic Church seems to be "obsessed" with the poor, the Vatican’s secretary of state said, "The answer is simple. Because this is who we are."

"Because taking care of the hungry, the thirsty, the stranger, the naked and the imprisoned," Cardinal Pietro Parolin said, "is the yardstick that our Lord Jesus will use to measure how much we shall have lived the greatest commandment of love."

Cardinal Parolin addressed guests at the Sept. 27 Pro Pontifice Dinner at Jesuit-run Fordham University during a visit to New York to lead the Vatican’s delegation to the opening of the 74th U.N. General Assembly.

The cardinal participated in 12 U.N. events during the world body’s opening week with Archbishop Bernardito C. Auza, the Vatican’s permanent observer to the United Nations, and his staff.

The index is a multidimensional measure of international poverty inspired by Pope Francis’ address to the U.N. General Assembly in 2015. At that time, the pope said water, food, housing and employment are essential for material well-being and religious freedom, education and other civil rights are essential for spiritual well-being.

At the invitation of the U.S. affiliate of the Vatican Foundation Centesimus Annus Pro Pontifice, known as CAPP-USA, Fordham University research manager Donna Odra and the graduate students identified measures for each of the seven needs and aggregated them into material and spiritual well-being indices.

They then developed a Fordham Francis Index that is closely related to many of the United Nations’ Sustainable Development Goals.

According to the report given to Cardinal Parolin, this Fordham Francis Index has a stronger emphasis on basic human needs than other measures of poverty and favors outcomes that benefit the marginalized. It also includes indicators of spiritual well-being, such as education, religious freedom and gender equity, which it says may play an important role in empowering the poor to be champions of their own destinies.

Cardinal Parolin said compassion for the suffering of the poor defined the apostolic journey. It also inspired the students to devise the Index "with the aim of knowing the situation of the poor, in order to help them to become dignified agents of their own development, so that they may live a life worthy of the children of God," he said.

Cardinal Parolin said the Catholic Church plays a "fundamental role as the largest provider of quality education" in many countries. He said the church "runs approximately 220,000 schools at all levels, from kindergarten to graduate schools, educating approximately 68 million students across the world, many of whom are not Catholic or even Christian."

"Catholic schools serve societies and not just the church, while remaining faithful to the distinctive approach of Catholic education that is rooted in the wisdom of the Gospel and the pedagogy of centuries of experience," he said.

Because Catholic schools help form students and help them become wise and genuinely compassionate, Cardinal Parolin said governments should offer them "support, even financially, and recognize their invaluable contribution to society and the possibility that they offer to parents to choose freely the type of education they want for their children."

The event was co-sponsored by CAPP-USA, Fordham University’s graduate program in international political economy and development, and it was hosted by Jesuit Father Joseph M. McShane, Fordham’s president.

Dr. Frederick F. Fakharzadeh, president of CAPP-USA, said the foundation was founded by Pope St. John Paul II in 1993 and has its headquarters at the Vatican. Its mission is to evangelize lay leaders with the principles of Catholic social teaching.

"With consciences formed on these principles, these committed Catholic lay leaders are called upon to be present in public life as a deep, credible voice to explain and implement Catholic social teaching in the various sectors of society," he said.

Fakharzadeh said the group comprises approximately 350 business leaders, academics and professionals worldwide, including 50 in the U.S. 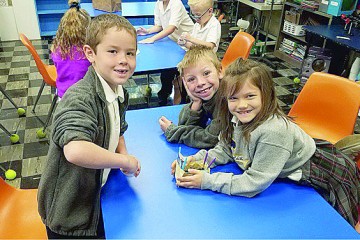