June 27, 2022 The Catholic Telegraph
Home»Commentary»Catholic Thoughts: ‘Because I said so’
Commentary

Catholic Thoughts: ‘Because I said so’

Do you remember what your parents would say to you when you questioned why you had to do something? Their answer was swift and lethal: “Because I said so.” Somehow, we knew that response ended all arguments and pleas on our part. Our parents made it clear that there would be no more discussion, and we might just as well do what was being asked.

Some items that made my parents’ list of non-negotiables included wearing jeans to church, eating dessert first, watching R-rated movies, staying out until 5:00 a.m. on prom night, and not showing up at Grandma’s Sunday night supper. I can still see the look on my father’s face when I innocently said, “But, Dad, everyone is doing it!” His response was always, “If everyone jumped off a bridge, would you jump too?”

In this current time, younger adults want to know why we tell them to do certain things or to behave in a certain way. The Millennials (those born after 1982) simply do not do anything that is not explained and that they don’t agree with. Herein lies the rub: there are certain things in life that we are asked to do without explanation. If we want to get into why we are being asked to do something, we need to take the time to find out.

Last week, I got caught in traffic and was late for an appointment. The backup was severe, and traffic was being detoured. I had two choices: I could sit stopped on the road and stew over the situation and resent the costly delay, or I could find out what was causing the problem. I turned on the radio traffic report that told me that live electric wires were down so traffic was being rerouted for safety’s sake. Somehow, once I understood what was going on, my short fuse was extinguished.

In recent months quite a fuss has been made over the contract addendum for Catholic school teachers in our diocese. Teachers are being asked to sign an agreement that states that they accept and practice the teaching of the Catholic Church. It just makes good sense that students and parents are expecting a Catholic education taught by men and women who are witnesses of faith. In other words: do what you teach or you are teaching something else.

We who make up the staffs and faculties of schools must be passionate about our faith and live it. A teacher of religion does more than explain the pages in a textbook. That teacher must bring those pages to life with his or her own belief and practice. What we need is more teachers who reject the values of a secular culture, who attend Mass on Sunday, and who have a vibrant prayer life. I know these are strong words, but someone has to speak honestly. Our church officials are simply asking that we understand what is being asked and practice the Catholic faith if we want to work in a Catholic school.

All this controversy has led me to look carefully at Catholic beliefs. Does the average Catholic know why we are asked to attend Mass on Sunday, what makes a sin mortal, why we baptize our children, where we go when we die, why sex outside of marriage is wrong, why priests are celibate, what makes abortion wrong, what is an unjust war, what is fasting, why fidelity is important in marriage, what the “body and blood of Christ” means, and on and on.

Most issues on the “Because I said so” list of my teen years have been resolved for me. I discovered that eating dessert first stops me from eating the healthy stuff that allows my body to function best. Dressing up for church is a way to show God respect. R-rated movies created a bad memory of sex without love and violence toward others. Grandma’s heart sagged every time my chair was empty on Sunday night. As for the church’s version of “Because I said so,” we have some work to do.

This Catholic Thoughts column by Jeanne Hunt originally appeared in the July 2014 print edition of The Catholic Telegraph.

Catholic Thoughts: ‘Because I said so’ 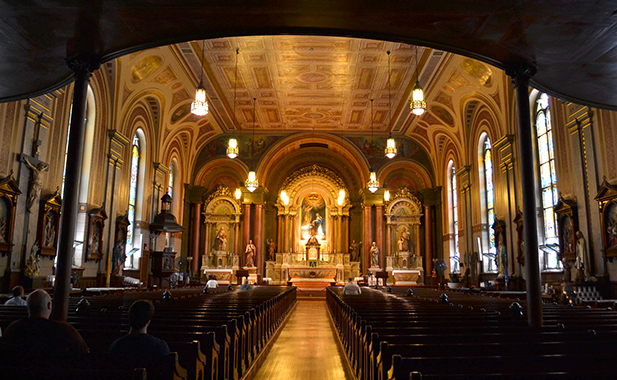