By Natalie Corzine Moore
Dominican of Hope Sister Monica McGloin has always been interested in labor issues and believes strongly in workers’ rights and justice.

A member of the local committee geared toward promoting both since its inception, Sister Monica notes that all religions support the tenet of workers’ rights but need to preach these foundations more. “You never hear that much about it, except around Labor Day but not much the rest of the year.” She works with the Cincinnati Interfaith Committee for Worker Justice (CICWJ) to help promote this message year round.

CIJWJwas formed in 1997, as the local chapter of Interfaith Worker Justice (IWJ). IWJ’s mission is “to advance the rights of workers by engaging diverse faith communities into action.”  The organization believes in: safe working conditions for all workers; fair wages, health care and pensions so workers can “raise their families and retire with dignity;” the right of workers to organize and bargain collectively without intimidation or retaliation; equal protection under labor law regardless of immigration status and “fair and just participation” in the global economy.

Locally, CICJWJ’s mission is to “educate and to mobilize the religious community on issues and campaigns” involving labor and to supply materials and guidance for workers seeking to improve wages, benefits and working conditions. They also support the rights of workers to organize and bargain collectively.

According to Tom Choquette, part time director, the group is independent of labor unions but collaborates closely with them on workers’ issues. Through this effort, CICWJ cultivates dialogue and relationships with local groups through worker justice campaigns and through formation and training for workers. They don’t “get in the middle” of labor disputes, but act as a facilitator between labor and management on issues. They also act as a resource for workers “seeking to improve their work and family economic situation through individual or collective action.”

CICWJ also seeks to encourage dialogue between labor and religious communities. Their goal is for religious communities to understand the “connection between faith and worker justice issues,” said Choquette. The group educates parishes by helping to facilitate service projects. They encourage congregations to create work assistance programs for the unemployed. They provide materials and speakers for Labor Day activities and sponsor special events like religion-labor dinners.

Choquette pointed to the similarities between Catholic social teaching and CICWJ’s mission. For example, the United States Conference of Catholic Bishops issued “Forming Consciences for Faithful Citizenship” in 2007, which reads, “Catholic social teaching supports the right of workers to choose whether to organize, join a union, and bargain collectively, and to exercise these rights without reprisal.” (no. 76).

In 2009, Pope Benedict XVI wrote that “the promotion of workers’ associations that can defend their rights must therefore be honoured today even more than in the past…” (Caritas in Veritate).  And in Centesimis Annus, Pope John Paul II said “society and the State must ensure wage levels adequate for the maintenance of the worker and his family. (no. 15).

Sister Monica has stayed with CIJWJbecause she believes the group’s mission supports Catholic social justice teaching. Through CICJWJW, she has been involved with helping the Service Employees International Union (SEIU) work with the Justice for Janitors campaign and helping to organize local security, restaurant and communications workers.

In June, she showed support to the Coalition of Immokalee Workers (CIW) that were in town to protest at Kroger’s annual shareholders meeting. (CIW represents Florida’s tomato pickers and was working to get Kroger to sign a fair food agreement with the workers.)
Dister Monica also became very involved in protesting Ohio Senate Bill 5 in 2011 that would have removed workers’ and unions’ rights to collectively bargain with their employers. She speaks publicly through the group so she can “give perspective to help people understand our goals through Catholic religious teaching.” She feels the group acts as an independent voice to help foster negotiations between workers and corporations so they can bargain together.  She believes the group “helps balance the power” at the bargaining table.

Both Choquette and Sister Monica agree that there is still much more work to be done in protecting workers today. Choquette commented in today’s political arena there is much discussion about “individualism” that contradicts current religious ideology on the issue. He said CIJWJand their work “present the counter cultural position.”

For more information on the group or to volunteer, visit: http://www.catholic cincinnati.org/ministries-offices/young-adult/volunteer/cincinnati-volunteer-opportunities/

Bishop Finn convicted on one charge of failure to report abuse 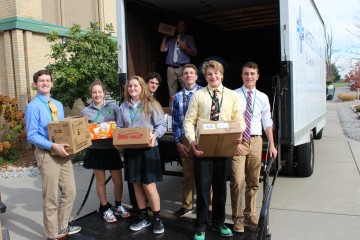