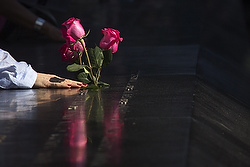 A woman lays her hands over the names of the first responders next to roses which were placed along the South Pool of the 9/11 National Memorial at the site of the World Trade Center Sept. 10. Today marks the 11th anniversary of the terrorists attacks that claimed the lives of nearly 3,000 people in New York City and Shanksville, Pa., and at the Pentagon.

Pope Francis to meet Trump at Vatican May 24