Students from all Archdiocese of Cincinnati high had the opportunity to participate in the teleconference, which was broadcast this year from Lehman Catholic High School in Sidney, Ohio. Archbishop Schnurr was seated at a table with Interim Superintendent of Catholic Schools Susie Gibbons with a Lehman Catholic flag in the background.

Twelve Lehman Catholic seniors were present in the room, while the rest of the school watched online. Through teleconferencing, the archbishop was able to see and hear the students from other high schools as they asked questions and listened to his answers.

The following are selected excerpts from the archbishop’s Q&A with the students, abridged for space and clarity.

Student: What is the most important political issue facing us at this time?

Archbishop Schnurr: “I would have to say religious liberty.

There are those that want to reduce religious liberty to the right to worship. That means that we could practice our faith within the four walls of our church, or the four walls of our homes, but we can’t have an impact on the society in which we live. And yet that is what Christ tells us to do, ‘Go out to all the world and proclaim the good news.’

In many ways this is a frightening world. And in this very frightening world, we are being told, ‘Keep your religious message to yourself. And yet, we as people of faith believe and understand that its the message of Christ that is going to resolve many of these questions and yet we’re being silenced. It is Christ who said, and we say it at every Mass, “Peace is my gift to you, peace I leave with you, but not as the world gives peace.” The God who created this world is not a God who created this world and became indifferent.”

Student: What is the role of the church in this presidential primary election season?

Archbishop Schnurr: “The church doesn’t direct people to one party or the next. What the church has to do, is educate our Catholics well in such issues as social justice and moral issues in the world today. Then they have to come to their own conclusions.

When I was your age, the Catholic church really didn’t take the time to explain the teachings of Christ to us. They just told us what we could do and what we could not do. I think the results of that is we have many Catholics who really don’t understand the faith. They go through the motions as I’ve mentioned before but they don’t understand why they’re going through the motions. Catholics have to assume a personal responsibility for their decisions.

Its the role of our church and the role of Catholic schools to teach as Jesus taught, and then allow you to come to your own conclusions.”

Student: What is the church’s position on Syrian (and other) refugees?

Archbishop Schnurr: “It is a very complex question.

On the other hand, any country has the right to protect its own citizens. Given the threat of the possibility of terrorists infiltrating the refugees that has to be taken very seriously into the equation…

Are we a country that welcomes refugees? Yes. Do we have a right to protect our borders? Yes. Do we have an obligation to assist those who are fleeing for fear of their lives? Yes. Is the only solution to bring them to this country or a European country? That I don’t know.”

Student: How do we get more students involved in going to Mass and the sacraments?

The teachings of Christ are certain and clear. But I do think maybe at times we have gone about them in the wrong way… What I like to talk about is if you go to the popular catechism YouCat which was endorsed by Pope Benedict XVI. If you look at that it starts off by saying ‘Who created you?’ And then second, ‘Why did he create you?’ I hope our young people are exploring that question.”

Student: How can women become more involved in Mass and the liturgy?

Archbishop Schnurr: “The second Vatican Council talked about active participation in the Mass. That doesn’t mean all of us have to be doing some physical activities. That also reflects where we are in our own prayer life. To participate fully means to understand that we are here at the Mass, participating fully in the life, death and resurrection of Christ and to be aware of that.

As far as women’s participation in the Mass, certainly we welcome the fact that women are very generous in offering their talents as lectors, they can serve at the altar, our choirs would be pretty dull if not for the voices of women in those choirs.”

Student: Was there a moment your faith was strengthened and what advice do you have for those struggling in faith?

Archbishop Schnurr: “Maybe I have lived a rather blessed life but I cannot recall anytime in my life that I felt my faith was being shaken. There were times when I thought that I was being asked to do things in my ministry that I didn’t think I was capable of doing, and I expressed my reservations and on two occasions I said no. Both times I was overruled, and I went on rather reluctantly only to find out that they were probably the two most enriching experiences of my entire priesthood…

To those who are experiencing challenges in their faith, you need to find someone with whom you can just sit down and talk. An individual who is struggling with the faith is not a unique individual. I’m not so sure in conveying the teachings of Christ we’ve really done it in the right way and it can come off rather hollow. Someone struggling in the faith should find an individual with whom they feel comfortable and just explore that. That’s a very healthy thing to do.

The last thing you want to do is despair. The thing you want to do is explore, to begin to explore. Many of the saints had the dark night of the soul and the prayers of some of the saints were “Lord I do believe but help my unbelief.” If you read the lives of the saints you’ll find many of them took their faith for granted and suffered this dark night of the soul and deep deep disbelief. But, in prayer and reaching out to others to help them understand where they were at in the faith, their progress in the faith after that was amazing.”

Student: What is the Archdiocese doing to respond to Pope Francis’ encyclical Laudato Si?

Archbishop Schnurr: “The archdiocese has two offices — property management and social justice. Those two offices have teamed up — the social justice office primarily — to go out and inform Catholics and the public in general on what Catholic social teaching has said really since Leo XIII and that has involved protecting the environment…

My own house has been tested for energy efficiency. We’ve emphasized recycling programs for parishes. I know parishes that are putting in solar panels to cut back on energy.” 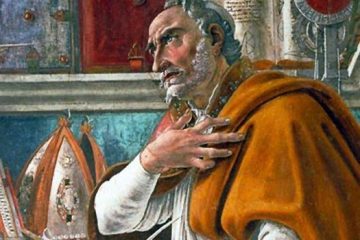