Denver, Colo., Dec 22, 2019 / 04:01 pm (CNA).- When John O’Brien was in high school, his father, while only in his forties, was admitted to an assisted living facility because of Pick’s disease, a rare disorder similar to Alzheimer’s.

“I spent many nights of my high school days and my college days spending time with him in the nursing home. And I realized that not only did my dad need accompaniment and love, but there were a lot of people there that I could tell were very lonely and down and out,” O’Brien told CNA.

O’Brien recently founded the Aquinas Forum, an initiative to strengthen faith through intellectual formation in the form of courses and lectures. Part of that initiative is a program called Works of Mercy, whereby on any given Sunday, a team of 10-15 people show up for an hour and a half to two hours at a local assisted living facility, Porter Place, to visit seniors.

O’Brien said people often bringing their kids with them, making it a family experience. And of course, he said, the seniors love seeing the children. He said he consulted with people who had done similar ministries in other places, such as in his hometown of Kansas City, and got tips on activities, board games, and other ways to connect with the seniors.

He said he asks team members to sign up for a six-week commitment to start out, and often the experience hooks them in for longer.

Kali Craig is one such participant, who had had a desire to do this kind of ministry for a while in the area where she lives, northwest of Denver, contacting her parish and various other organizations, but was never quite able to get connected until she heard about the Aquinas Forum through an archdiocesan young adult newsletter.

“It wasn’t easy for one person to figure out how to do this and start visiting regularly with seniors,” Craig told CNA.

“The Aquinas Forum opened the door to something I felt I was already called to do.”

Craig said she had helped to take care of her grandmother during her battle with cancer a few years ago, which had confined to her bed for months at a time.

“When [my grandmother] passed, I just felt this longing. I just wanted to reach out and comfort the elderly when they’re sick, or lonely, or whatever their case is,” Craig said.

“I had this longing to do this…but I could never find the way to do it.”

Craig said she was nervous the first time she went to the nursing home, worrying about how she would manage to carry on a conversation with strangers beyond small talk. She said before she went in she was thinking of questions in her head to ask the seniors in case she started to run out of things to say.

Having done the visitations for several weeks now, she said she recommends taking the leap and trying something like this regardless of whether you’re nervous.

“It’s a door that God is opening to you to show your love and be present, and He shows His love through you. You’re not only helping others, but it’s an incredible experience for yourself as well,” she commented.

“It’s transforming our lives just as much as the people we’re talking with.”

She said one of the seniors she and her husband have met on their visitations, Jeff, has only one close family member, who lives three states over. He’s a musician, an avid record collector, and a traveler.

“He is kind of the perfect person we were hoping to find,” she said, laughing.

“Every time we talk with him, it’s like a whole new part of his life that he shares with us. He definitely does most of the talking, we kind of just sit and take it all in and listen, which makes us feel good. That’s kind of our purpose of being there, when someone wants to talk and share their life experiences.”

O’Brien said he sees this apostolate as a fundamental part of the Christian life; sharing mercy with the broken, the lonely, and the oppressed, who are highlighted in the Gospels as people with whom Christians ought to share love.

O’Brien said he had often heard from people, like Kali, who wanted to get involved in an apostolate such as this— often sparked by an experience of a family member in a nursing home, like his father— but had no idea where to start.

“Being involved in faith formation for many years, I heard people say: ‘I love my faith, but I do want to give myself more, though, and serve more, and I’ve found that it’s hard to do that,’” he said.

When considering how he would start such an initiative, O’Brien contacted his friend Dorothy, whom he knew did a Communion service once a week for the elderly at the nursing home. He spent time with her, helping out with the Communion service.

He said he knew getting involved in an apostolate like that would be a wedge to start inviting other friends, so they could befriend some of those seniors that came to the Communion service.

For those not in the Denver area, O’Brien recommended talking to the receptionist at the local nursing home and asking if you and friends can come over, and perhaps even lead a Communion service. He also recommended reading Father Michael Gaitley’s book “You Did it to Me: A Practical Guide to Mercy in Action,” which goes through all the works of mercy and offers practical suggestions.

O’Brien said one of his goals in starting the initiative was to remove as many of the bureaucratic barriers as possible for people who want to start practicing the works of mercy.

“In a bureaucratic society, we always think there’s going to be some method that’s given to us to just do it, and we think we have to learn the right method to do this— whereas the beautiful thing about works of mercy is it’s a lot simpler than that,” he said.

“It’s personal, focused attention. It’s listening. It’s sharing what you’re passionate about. It’s the mystery of personal presence, which actually isn’t bureaucratic at all. So whatever form that someone can take to share their person and God’s love through their person, whatever small humble wedge that is in their corner of the world…as Pope John Paul II said, when we give mercy, we receive mercy,” O’Brien concluded.

“To share God’s love through friendship and through personal presence, at the same time, we receive that.” 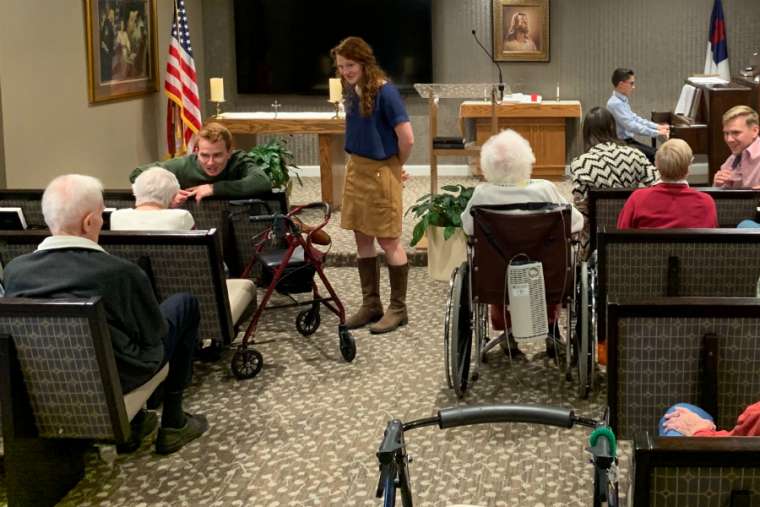 Pope Francis: To discard the elderly ‘is a grave sin’