She is confined to a wheelchair and can’t speak because she has primary lateral sclerosis, a rare disease affecting the movement of her arms, legs and face. But her spirit and her determination are entirely unfettered.

Sister Noel did not have a ticket to the Sept. 24 vesper service at St. Patrick’s Cathedral. No problem. Her friends launched a Facebook campaign on her behalf. The page got more than 100,000 “likes” and she scored a pair of tickets.

Hours before the service, Sister Noel and her nurse companion, Maryknoll Sister Bernadette Cordis Duggan, took positions close to the front of the cathedral, with other wheelchair-users. Sister Noel hoped to attract Pope Francis’ attention with a sign around her neck that read in Spanish, “Abrazame por favor, Papa.” She used her Boogie Board LCD writing tablet to translate the message for Catholic News Service. “Please hug me, Pope Francis,” she wrote.

For good measure, she had an Italian version on the flip side.

Asked if the people who gave her 100,000 “likes” were offering odds on whether the Pope would respond, she wrote, “I don’t think there’s a pool going. I leave it to the Lord and Pope Francis.”

Regardless, she told CNS she was already “on cloud nine.”

On his first swing past Sister Noel’s section, the pontiff stopped to speak to a young girl sitting near her. At the end of the service, he came back to greet Sister Noel. There were huge grins all around.

In his remarks during the service, Pope Francis thanked the nation’s priests, brothers and women religious for their service and gave particular thanks to women religious saying, “Where would the church be without you?”

“It was absolutely the words that we had to hear,” Cabrini Sister Bernadette Casciano, who was in the crowd at the cathedral, told CNS.

As the leader of the church, he knows the work of women religious well and how they serve, it was “reaffirming” to hear his support in such a public way, she said.

“This was fantastic,” she added. “He was right on about his comments.”

Sisters Joan Magnetti, Jan Dunn, Margo Morris and Helen O’Regan, all Religious of the Sacred Heart, were together when in the pews at the cathedral when they heard the pope’s words of support.

“I cried,” said Sister Joan. The pope’s support is important, she said. “But we have a lot more work to do.”

His affirmation at the cathedral was one of the “only times we get acknowledged” said Sister Jan, adding that others in church hierarchy need to do the same and be inclusive of women religious in that hierarchy.

Sister Margo said the pope has now has “challenged” that hierarchy and has set an example for others to follow.

“He challenges the status quo wherever he goes,” even that of the church, she said. “But in a responsible way, not a forceful way.”

A picture says a thousand words: LaSalle Cheerleaders with Down Syndrome Association 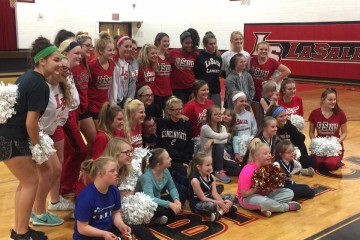