MANILA, Philippines (CNS) — As the body count rises in the Philippines’ war on drugs, a Catholic priest is trying to create a space where healing takes precedence over killing.

On Sept. 1, 20 drug users surrendered to police under the watchful eye of Father Luciano Feloni, an Argentine priest who is pastor of Our Lady of Lourdes Parish in Caloocan City, on the edge of Manila. Another 20 were expected to surrender under a program the parish has dubbed “Healing, not killing.”

The mass surrender — which Father Feloni orchestrated in coordination with the police and local political leaders — comes as drug users and pushers are being killed throughout the country in response to an all-out assault on drugs by newly elected President Rodrigo Duterte. Father Feloni said the killings began in the days leading up to Duterte’s inauguration June 30. Since then, between three and five people in his parish have been killed every week. One victim was shot in front of the parish church immediately following Mass.

“I know the numbers because we said the funeral Mass for them. Almost all were killed in the same way: A motorcycle would come up with two people, and one would get off and pull a gun and kill the person, then they would ride away. No one ever gets caught or convicted,” Father Feloni told Catholic News Service.

Father Feloni’s parish and the local government are currently accompanying the newly surrendered drug users through a process of detoxification and rehabilitation, as well as providing food in exchange for work in the neighborhood.

The priest said he supports Duterte’s campaign against drugs.

“It has to be crystal clear that the church is 100 percent behind the president on this campaign against drugs, because drugs are destroying the country. I come from Latin America and I know how it looks when drugs destroy a place. But at the same time, we are against the killings,” he said.

The Philippine National Police announced Sept. 4 that more than 1,000 alleged drug users and dealers have been killed in police operations since Duterte took office and encouraged police to not worry about due process. “My order is shoot to kill you. I don’t care about human rights, you better believe me,” Duterte said Aug. 5.

Nearly 1,400 killings of alleged drug users in the same period were characterized as “deaths under investigation,” many of them reportedly carried out by killers hired by drug gangs worried that those who turn themselves in to police will reveal the names of their suppliers in a criminal enterprise, which by many accounts stretches high into the upper echelons of the government and police.

Senior Superintendent Joel Napoleon Coronel of the Manila Police District told Catholic News Service Aug. 29 that many of the killings are the result of internal tensions within and between drug gangs facing a collapsing market. Yet he said authorities are also investigating several “rogue policemen who are eliminating their former runners, traffickers and sellers.”

In response to the unprecedented wave of killings, tens of thousands of drug users — mostly addicts of shabu, a local form of methamphetamine — have turned themselves in to police, taking a chance on life in overcrowded jails rather than risk getting gunned down on the streets.

As Father Feloni watched the killings ravage his parish, he talked with his parish council, which agreed that something had to be done. The council president had lost his brother, a police officer, in a shootout with drug pushers.

“We agreed that killing is not a solution to our problems,” Father Feloni said. “And we asked what we could do. The church has been denouncing the killings and getting feedback from the people that we are meddling. They say we’re talking and talking and talking and doing nothing. The message that we were totally in favor of the campaign against drugs wasn’t coming across properly. So we began to ask what we could do proactively, more than just stating that we’re against the killings.”

Working with local government officials and the police, Father Feloni garnered commitments to get help for users who were willing to turn themselves in.

“There is no real program being offered by the government. Once you surrender, you go home and it’s assumed you’ll stop being an addict. That is not real thinking. You cannot stop addiction just by fear. It’s a sickness, and you need psychosocial intervention to cure it,” he said. “If killing isn’t a solution, neither is surrender. It’s just the beginning. Unless you offer something, people cannot really change.”

“Almost all the users are also small-scale pushers. They get their portion free, but at the same time sell to others to get a little income. If you stop their business, they have no way to survive, no way to feed their children,” the priest said.

Father Feloni said that as the program took shape, he had some very frank discussions with the police. “I was also honest with them and said, ‘Don’t kill them afterward,'” he said.

The priest, who said he and local police are “on the same page,” said he worries about the effect the killings are having on Philippine society.

“A lot of people are really taking the president’s ideas very seriously, and that’s dangerous. People make decisions about each other’s lives, and they put an addict on the same level as a drug lord. We are not very far away from becoming like ISIS. It could be people drinking or having a long beard, or having an extramarital relationship or playing cards. At the end, everybody should be killed,” Father Feloni said.

“We are becoming a much more violent society. And that can easily spiral out of control. As the church we have to do something. They were asking me today about what could happen to any of us who are working on this. We can also be targets of violence. And I said that the biggest danger is that we as a church do nothing. We will face God and God will ask us what we have done beside funerals,” he said.

The priest, who has served in the Philippines for 22 years, recognizes the personal risks involved.

“We are trying to take clients away from the drug syndicates. When you rehabilitate people, then less people will buy drugs, and they won’t be happy. Police officers who protect the syndicates will not be happy. So a lot of people will be happy to kill either the neighborhood captain or myself,” said Father Feloni, who says he is intentionally varying his daily routine.

Bishop Antonio Tobias of Novaliches was present for the surrender ceremony, and Father Feloni said the church sees his program as a pilot project for the diocese and beyond.

“If after six months the parish priest is still alive, then other parishes will be encouraged to do the same,” Father Feloni said. 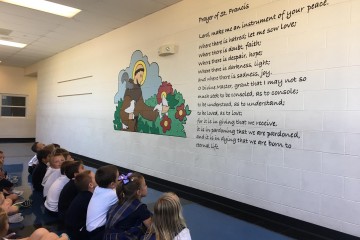