JACKSON, Miss.  — Seventeen bishops, dozens of priests and a congregation of about 1,000 people gathered Sept. 16 at Thalia Mara Hall in Jackson to celebrate the 175th anniversary of the Catholic Diocese of Jackson.

The celebration included a musical prelude, Mass and a reception designed to embrace all of the cultural influences that give the diocese its unique character.

Before the celebration, people could take a look at exhibits on each of the bishops of the past prepared by students in Catholic schools in the diocese. The exhibits included mosaics, banners and even a Lego display. Students who worked on the projects were invited to carry in banners bearing the images of the bishops they studied.

Priests and seminarians from all over the diocese then followed. Bishops from surrounding dioceses processed onto the stage to call the congregation to prayer.

The original diocese, founded July 28, 1837, encompassed the entire state of Mississippi, with Natchez as the first cathedral city. The first bishop, John Joseph Chanche, a Sulpician, came from Baltimore to serve the fledging flock in 1841.

The anniversary celebration included many touches of history from across the diocese, including the crosier and chalice given to Bishop Chanche by Pope Gregory XVI in 1845. The altar and ambo were borrowed from St. Francis Church in Yazoo City, which closed as a parish earlier this year to form one parish community in Yazoo City.

The music selected included Verdi’s “Chorus of the Hebrew Slaves,” symbolizing immigrants arriving in a strange land and missing their homeland; “America the Beautiful,” symbolizing how all cultures come together to form one voice, one church and one nation; familiar spirituals; a Protestant hymn with an Irish melody; a lively Spanish hymn; and Latin chant offerings.

The celebration culminated in a rousing version of “Lift High the Cross,” which featured the full choir, congregation, organ, brass and piano.

Readings and prayers were offered in Choctaw, Vietnamese, Spanish and English to incorporate the many faith communities active in the state.

Jackson Bishop Joseph N. Latino reflected on the long history of the diocese in his homily, pointing out how intimidating it must have been for the young Bishop Chanche to step off a steamboat in Natchez at night, to be greeted by only a porter. He pointed out that although there were no churches in the state when the first bishop arrived, he and his flock built a lasting community of faith.

Bishop Latino closed by urging the Catholic community to take to heart Pope Benedict XVI’s call for a Year of Faith beginning Oct. 11.

“We want this year to arouse in every believer the aspiration to profess the faith in fullness and with renewed conviction, with confidence and hope,” the pope wrote in announcing the year.

“This was the mission of Bishop Chanche and our early diocesan family and it is still our mission today,” Bishop Latino said. “As we celebrate our legacy today and continue to build upon it, let us be inspired by that legacy in a way that causes us to renew our faith and live our faith by reaching out to the world in love and compassion and bringing Christ more strongly into the lives of our families, friends and communities.”

Biblical parallels in comic books? It's more than just good vs. evil 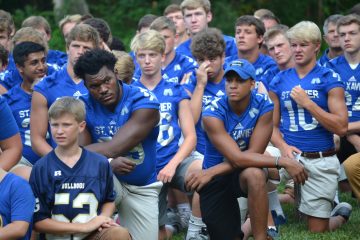