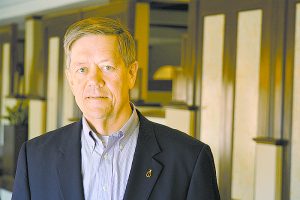 For two decades, Ted Bergh worked in a business charged with being the community watchdog, reporting the good and bad of a changing society.

Today, the former chief financial officer of the Gannett-owned Cincinnati Enquirer, finds himself serving hands-on in a ministry dedicated to implementing change for a better future. For the past five years he has been chief executive officer of Catholic Charities of Southwestern Ohio.

“I greatly enjoy what I’m doing now. It’s very fulfilling. I look at it as a career I have trained for all of my life. Working in the newspaper business was challenging and putting out a good product was important, but, as I came to the end of that career, it was important to do something different,” said Bergh.

“I call it providential,” he said. “When I left Gannett, I still had kids who were going to go to college. I still wanted earnings. I could have moved to another newspaper. I did have some opportunities in other newspaper markets, but I decided I wanted to stay in Cincinnati with my daughters in school, so, I moved on to (Queen City) Metro and in Metro I got involved in nonprofit. Then I went to CMHA (Cincinnati Metropolitan Housing Authority). It was a progression.” When Kathleen Donnellan retired from Catholic Charities, Bergh applied and got the job.

Bergh worked as a financial executive in the news business for 20 years, starting that career in Elmira, NY. He and his wife, Margaret have three grown children — daughters Maria and Rebecca, graduates of Ursuline Academy, and son Francis, a St. Xavier High School graduate.

A life-long Catholic, Bergh said he was drawn to studying theology. After taking two related courses at Xavier University to test the waters, he went on to earn a master’s degree in theology.

“I did not know if I would do something professionally or if I would retire and do something as a volunteer. It all came together and it’s been five years now that I have been with Catholic Charities. The Holy Spirit was working,” he said.

In the past five years, Bergh said he has seen several initiatives form, grow and succeed.

“We expanded the refugee program,” he said. “We had 140 refugees two years ago, and last year we had 390 refugee arrivals. We are at 250 so far this year, and it may push to about 300. It may be affected by the new administration. It’s putting us in a very difficult situation. We are uncertain about arrivals.”

“We have expanded that quite a bit,” he noted. “We focus on education and health and legal immigration service — the three major focal points to welcome (the Hispanic and Latino) population. We are involved in the mayor’s Welcoming Cincinnati initiative and we are doing the MARCC (Metropolitan Area Religious Coalition of Cincinnati) card initiative.”

The coalition, representing 17 faith groups, is providing identification cards to immigrants, impoverished and homeless people who do not possess valid identification. Catholic Charities processes the cards, Bergh explained, which provide local identification that is easily recognizable and accepted by law enforcement in the event of a crime or a traffic accident.

“We also saw a need to put legal immigration services on staff. We have a lawyer on staff now and we are providing immigration services because there are unaccompanied children involved,” Bergh explained, saying they have seen increase in the number of women and minor children coming across the border because they are in danger in their home countries.

“It started in Mexico and it spread to Guatemala and Honduras,” he said. “There are a lot of people who come because they are in a dangerous situation or they are literally starving. Most of them get picked up by immigration, but women with children and minors are not sent back until they have a date in court. With a lawyer, the probability of getting some kind of status is like 75 percent, but without a lawyer, the credibility of them getting immigration status is about 25 percent; so, we have an advocate on board now.

Bergh also cited efforts to feed the poor that have been successful.

The Food for All Program addresses “more of a distribution problem than a food shortage problem,” he said. “We went out into the five eastern counties of the archdiocese where we were not doing a lot of work — Brown, Adams, Clermont, Clinton than Highland —and we go with a mobile pantry. We partner with the Free Store Food Bank and we get food delivered to a church or community hall. We have volunteers show up one day each month in each county. We do five a month and have a food pantry set up. We see about 150 to 200 families in each county.”

The last of four programs Bergh cited as his agency’s most ambitious under his leadership is a new “backpack program,” mirroring a similar undertaking at Catholic Inner-City Schools.

“We found three schools that did not have a backpack program and were also trying to do counseling and casework with the families,” Bergh said. “We went to St. Clement in St. Bernard; St. Martin of Tours in Cheviot; and Sts. Peter and Paul in Reading.

“What happens is the kids who are on a school lunch program often do not eat adequately on the weekends. So, we deliver a plastic bag of food which has three nonperishable meals,” Bergh said. “They have crackers, applesauce, juice and teachers put the bags in the child’s backpack when they get a chance so they do not embarrass or identify the children. The kids then have a bag of food they go home with for the weekend. We couple this with family mental health counseling.”

Champions of Mercy: Partners in Hope