Burke Masters was a baseball player who waited years for his call up to the major leagues. But when it finally came, he was wearing a different uniform than he expected.

Masters, you see, is a Catholic priest. And years after his dream died out in the minor leagues, he was named the chaplain of the Chicago Cubs.

"God was saying this was your dream to be a major league baseball player and now you’re living my dream as a priest. And you get to do it in the major leagues," he said.

His inspiring story — built around a surrender to God’s will — is why Father Masters is featured in "Everyday Heroes," a video series produced by the Knights of Columbus showcasing ordinary men acting in extraordinary ways, who are strengthened by their Catholic faith and membership in the Knights of Columbus.

Father Masters was not raised Catholic. He played baseball at a Catholic high school and was baptized into the Catholic Church during his senior year. As a student-athlete at Mississippi State University, he fit in his faith when he had time, but baseball was his central focus. He also was dating a girl that he hoped to marry. God had other plans for him.

One day, his girlfriend invited him to eucharistic adoration. He was afraid of the silence there, afraid of what God might tell him. What he heard was that God wanted him to become a priest. Unsure, he asked God for a sign. Soon people began telling him he would make a great priest. With this affirmation, he went to the seminary and "didn’t look back."

While in the seminary, the Knights of Columbus supported him both financially and spiritually. Knights councils around the world support vocations through the Refund Support Vocations Program, or RSVP, through which they adopt a seminarian or religious aspirant by praying for them and providing monetary assistance.

He sees the Knights of Columbus as continuing God’s mission.

"If you look at what Jesus did, strengthening and teaching, and then sending forth, and that’s what the Knights of Columbus does with their men for fraternity, for faith and then for charitable works," Father Masters said.

In 2013, Father Masters got a call saying that the Cubs were looking for a Catholic chaplain. He has served in that role for six years, offering the sacraments to Cubs players, coaches and employees.

He offers two Masses before Sunday home games at Wrigley Field — one for the employees, which he celebrates in section 209 in the stands — and one in the locker room for players and coaches from both the Cubs and the visiting team. After Mass, he is available for anyone who wants to talk or go to confession.

Given the busy schedule of the team, Father Masters’ presence is important.

"Oftentimes to have a Saturday evening game and then a Sunday 1 o’clock game, you have to be at the ballpark early, so it’s really hard to get to Mass sometimes," Father Masters said. "Being able to provide the sacraments at the stadium is very, very appreciated by the Catholic players."

In addition to serving as the Cubs’ chaplain, Father Masters is the director of adult formation in the Diocese of Joliet, Illinois. He also works with Catholic Athletes for Christ, an organization dedicated to serving Catholic athletes, coaches and staff.

In his time with the Cubs, Father Masters has seen a lot. He was the chaplain during the Cubs’ 2016 World Series victory, and he will be there as the team transitions to new management next season. Through it all, the priest provides a steady hand to the team.

"I see my ministry as a ministry of presence, and just being available and building relationships with the guys," he said. "Inevitably guys go through difficult times on or off the field and just to help them to trust in the Lord."

Father Masters sees a connection between faith and the ups and downs of rooting for the Cubs. He said there is "nothing more that is affiliated with faith than a Chicago Cubs fan" because no matter how they play, fans fill the stadium to support their team after all these years. And no matter how far we’ve strayed from God, there is always a fresh season, a new spring training, ahead.

"It’s not about our plans," Father Masters said. "Every good thing that you have has come from him. Offer them back to him. Because we can’t outdo God in generosity. And watch what he does with it."

Editor’s Note: A video accompanying this story can be found on YouTube at https://t.co/tLAKYmvRfZ?amp=1. To share your story of an everyday hero with the Knights of Columbus contact [email protected] 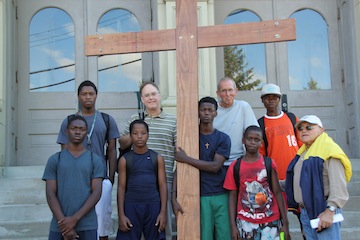