VATICAN CITY — Parents who juggle packed work and family schedules deserve a Nobel Prize in mathematics for doing something not even the most brilliant scientists can do: They pack 48 hours of activity into 24, Pope Francis said.

“I don’t know how they do it, but they do,” the pope told thousands of people gathered Aug. 26 for his weekly general audience. “There are moms and dads who could win the Nobel for this!”

Focusing his audience talk on the family and prayer, Pope Francis said he knows modern life can be frenetic and that family schedules are “complicated and packed.”

The most frequent complaint of any Christian, he said, is that he or she does not have enough time to pray.

“The regret is sincere,” the pope said, “because the human heart seeks prayer, even if one is not aware of it.”

The way to begin, he said, is to recognize how much God loves you and to love him in return. “A heart filled with affection for God can turn even a thought without words into a prayer.”

“It is good to believe in God with all your heart and it’s good to hope that he will help you when you are in difficulty or to feel obliged to thank him,” the pope said. “That’s all good. But do we love the Lord? Does thinking about God move us, fill us with awe and make us more tender?”

Bowing one’s head or “blowing a kiss” when one passes a church or a crucifix or an image of Mary are small signs of that love, he said. They are prayers.

“It is beautiful when moms teach their little children to blow a kiss to Jesus or Mary,” the pope said. “There’s so much tenderness in that. And, at that moment, the heart of the child is transformed into a place of prayer.”

“Isn’t it amazing that God caresses us with a father’s love?” he asked the crowd in St. Peter’s Square. “It’s beautiful, so beautiful. He could have simply made himself known as the Supreme Being, given his commandments and awaited the results. Instead, God did and does infinitely more than this. He accompanies us on the path of life, protects us and loves us.”

If you learn as a child to turn to God “with the same spontaneity as you learn to say ‘daddy’ and ‘mommy,’ you’ve learned it forever,” he said.

By teaching children how to make the sign of the cross, to say a simple grace before meals and to remember always that God is there and loves them, he said, family life will be enveloped in God’s love and family members will spontaneously find times for prayer.

“You, mom, and you, dad, teach your child to pray, to make the sign of the cross,” Pope Francis said.

The simple little prayers, he said, will increase family members’ sense of God’s love and presence and their certainty that God has entrusted the family members to one another.

War and rumors of war, even for our grandchildren 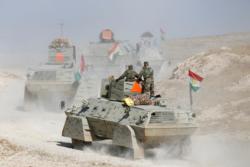