‘Fences’ actor got his career started at his Catholic high school

WASHINGTON (CNS) — In a real-life situation akin to the “High School Musical” movie franchise, Russell Hornsby was a jock who got the acting bug via the high school musical.

Hornsby, a native of Oakland, California, was a sophomore at the all-boys St. Mary’s College High School in Berkeley, where he played football. But teammates dared him to try out for the school musical, “The Wiz.”

“And when it’s a dare, you’ve got to do it,” said Hornsby, who portrays Lyons in the new movie “Fences,” which hits multiplexes nationwide on Christmas Day.

So, for his audition, Hornsby prepared Bert Lahr’s soliloquy on courage as the Cowardly Lion from “The Wizard of Oz,” the 1939 movie musical upon which “The Wiz” was based.

And, to the delight of, and an ovation from, his fellow actors from “Fences,” Hornsby — who might have refined his approach in the ensuring years — took it from the top, playing the part not only of the Cowardly Lion but all his companions on the Yellow Brick Road, getting not only the cadence and inflections of Lahr’s voice perfectly, but also the character’s sputtering false bravado.

“Your majesty, if you were king, you wouldn’t be afraid of anything?

“Not nobody, not nohow!”

“Not even a rhinoceros?”

“How about a hippopotamus?”

“Why, I’d thrash him from top to bottomamus!”

“Supposin’ you met an elephant?”

“I’d wrap him up in cellophant!”

“What if it were a brontosaurus?”

“I’d show him who was King of the Forest!”

Hornsby snared not the Cowardly Lion in tryouts, but the Scarecrow, and he was hooked. “Plus, there were girls there, so that helped,” he laughed during a Dec. 6 interview with Catholic News Service as Hornsby and other cast members from “Fences” visited Washington for a preview screening.

On a serious note, Hornsby said, “Athletes can get discarded quickly. I could see it even then.” That, for him, made the switch to performing easier.

He headed east to Boston University and got a bachelor’s degree in performance, then snagged a coveted spot in Oxford, England, at the British Academy of Dramatic Art.

On television, Hornsby plays Detective Hank Griffin on the NBC series “Grimm.” But in “Fences,” he plays Lyons, the son of Troy (Denzel Washington) from an earlier marriage. As passionate as Troy was about playing baseball — he was a Negro Leaguer but too old to benefit from the erasure of the color line — Lyons’ passion is music and he seeks a small loan from his dad to give his career a boost.

Hornsby and Washington are just two of the actors reprising their roles in the film version after having acted in a 2010 Broadway revival of the August Wilson play. Wilson wrote the movie screenplay for the film, but died in 2005. According to Mykelti Williamson, who plays Troy’s brother on stage and on film, said Washington won the rights to the movie, but insisted on mounting a stage production first “to be true to the material.”

The reason for the six-year gap between the revival and the movie? “Denzel’s got a busy dance card,” replied Stephen McKinley Henderson, another featured performer in both the play and the film. Henderson has acted in nine of the 10 August Wilson plays that constitute the “Pittsburgh Cycle” — all of the shows are set in Pittsburgh — but called in some circles the “American Century Cycle,” partly given Wilson’s standing in American theater and partly because the plays look at the evolution of black life and race relations in the United States through the generations.

“Suffering is a leitmotif” in “Fences,” but “also brutal honesty and joy in unexpected moments, which is what enlivens the movie, said Kurt Jensen, a guest reviewer for Catholic News Service, in his review of the film. “Moral decisions, and the consequences of immoral ones, lurk at every turn in the plot as well.”

“Fences” received a classification of A-III  adults  for references to adultery, frequent use of the n-word and a single instance each of profanity and rough language. Even so, Jensen advises, “the movie’s focus on ideas and their consequences makes it acceptable for mature adolescents.”

A picture says a thousand words: Santa and Safety

‘Fences’ actor got his career started at his Catholic high school 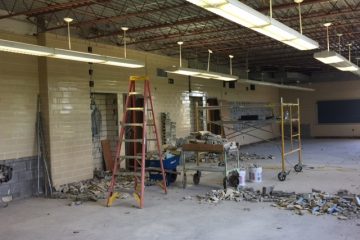