DAYTON DEANERY — Priests should preach God’s word from His perspective, not their own, in helping parishioners form their Catholic conscience.

That was among the key messages Father Earl Fernandes shared during a presentation at the annual priest convocation Oct. 7 at Incarnation Parish in Centerville. Nearly 200 priests from across the Cincinnati archdiocese attended the daylong event.

“You want to challenge [parishioners] to strive for excellence. If we never challenge, we’re possibly enablers,” said Father Fernandes, an assistant professor of moral theology and dean of Mount St. Mary’s Seminary. “We want to form people in virtue.”

It’s difficult today for parishioners to find an appropriate director for formation of conscience, Father Fernandes said, explaining that the Sunday homily is how most parishioners receive such formation. Still, priests face challenges in addressing difficult moral issues from the pulpit; the lack of time or nuance and the fear of dwindling congregations or collections.

“But should we never address difficult moral issues during the homily?” Father Fernandes asked. “The homily provides a unique opportunity within the liturgical assembly to share and form conscience.”

To inspire priests and help them overcome fear, Father Fernandes suggested St. John Chrysostom as a model. Born in Antioch in 349, St. John Chrysostom was known as an eloquent, but challenging, preacher. Before becoming a priest or deacon, he was in a monastic community for four years and spent two years in a hermitage.

If a priest were to speak on climate change, for example, parishioners might dismiss the message if the priest started with politics, Father Fernandes explained. It would be more effective to begin the homily talking about God’s creation.

Regardless of the issue, Father Fernandes urged the priests to ask themselves if they are being driven by God’s word or political preferences.

“It’s also essential to contemplate God’s word…to encounter the source of life and truth [which] will sustain us when people are angry with the challenging word which we have preached,” Father Fernandes said. “Knowing the Lord and being certain that we have preached His word, not ours, might not make us popular but it will bring us the consolation of knowing that we have done the right thing.”

Referring to the ongoing immigration debate, Father Fernandes said that while the U.S. Catholic bishops are strongly in favor of comprehensive immigration reform, an overlooked element is that illegal immigrants must accept personal responsibility for breaking the law. They should acknowledge their unjust actions for those who have followed the law.

“Nevertheless, just because one has broken the law, does not mean one should be abandoned,” Father Fernandes said. “John Chrysostom reminds us that in addition to the homiletic call for personal responsibility, there is also the evangelical call to solidarity without justifying illegal actions. It was solidarity which enhanced John’s credibility in preaching.”

Priests are called to minister the church’s compassion. People have a right to migrate to provide for their families. Those rights, however, must be balanced with the rights of states to protect their citizens. While breaking the law has consequences, must the penalty be so severe, especially when the legal system with regard to immigration is so broken.

“Will the church sit silently by as the limited paths for legal immigration are filled and as families who choose other paths are torn asunder and as illegal immigrants are exploited?” Father Fernandes asked. “What are the church’s duties with respect to this issue?”

In speaking of defending human life, Father Fernandes said there is little, if any, need for the death penalty because the state has adequate means of protecting the public. He encouraged priests to ask themselves if they promote and defend life to the fullest. They were also asked how their parish gives a Christian face and soul to the community.

Earlier in the day, Father Michael Seger, associate professor of moral theology at the Athenaeum of Ohio, discussed forming Catholic conscience in compassionate justice. The topic is particularly timely during election season.

“The midterm elections prove to be very explosive,” Father Seger said. “No one sitting here this morning is naive about politics; it’s all about power.”

While power is necessary, it is open to abuse, he said. When it is not tied to moral principals we risk cynicism and sin. When power is not used in moral formation it threatens the powerless.

He encouraged priests to look to the teaching of the church in forming conscience for compassionate justice. They also need to face their own biases and prejudices, he said. Life experiences and moral imagination — the ability to bring fragments of experience into an intelligent whole that puts experience into historical context — help form conscience.

During an afternoon discussion, the two moral theologians fielded several questions from the audience. The topics covered such things as climate change, individuality, solidarity with the infertile, capital punishment and end of life issues.

Father Patrick Slonecker, pastor of three parishes in the northern portion of the archdiocese, said he enjoyed the presentations.

“I certainly appreciate the blessing of Father Seger and Father Fernandes in sharing their expertise with us,” Father Sloneker said “What a great resource we have in them.”

The priests concluded the day with a question-and-session with Archbishop Dennis M. Schnurr, followed by prayer.

The Catholic Moment: It’s time to pray the rosary 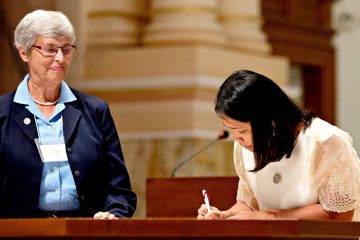