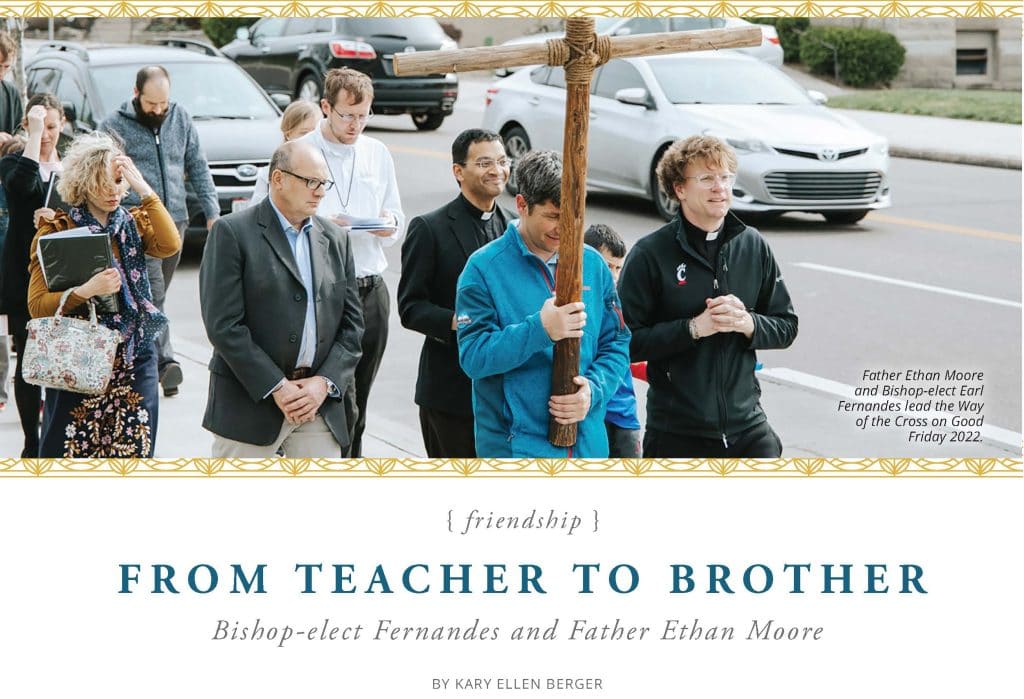 “Everyone who knows Father Earl Fernandes has a Father Fernandes story.”

Admitting that he is one of hundreds privileged to have associated with Father Fernandes before he was assigned as the Bishop of Columbus, Father Ethan Moore said his connection to Father Fernandes began when he was only a teenager.

Moore grew up in Albuquerque, NM, before moving to Ohio. He was introduced to Father Fernandes, then a teacher and priest, when he attended Lehman Catholic High School and Holy Angels Catholic Church in Sidney.

“At both school and church, Father Fernandes had a way to be personable and draw people to Jesus in a way that was very relatable,” he said.

While Moore was in high school, becoming a priest wasn’t on his mind, but Father Fernandes thought differently. “Father Fernandes told my parents I should be a priest and I was like, ‘No way,’” laughed Father Moore.

After graduation, Moore enrolled at Franciscan University to pursue a nursing degree. During his sophomore year’s study abroad program, he spent a semester in Gaming, Austria, and participated in a 10-day trip to Rome and Assisi. “When I was in Rome, I encountered Father Fernandes,” said Father Moore.

A similar encounter happened years later. After switching majors and graduating college, Moore was more open to seminary, but began working and spent time in Corpus Christi, TX. “I was active at a parish there called St. Patrick’s,” he said. “I knew some members of the parish were going to take a trip to the Holy Land. I had the opportunity to go and it was a wonderful, life changing experience.”

“And wouldn’t you know it, in the Holy Land, on the Via Dolorosa, I saw Father Fernandes,” laughed Father Moore. “It was so unreal.”

Years later, he saw Father Fernandes again — this time during a men’s conference at Xavier University’s Cintas Center. “There were thousands of guys there,” noted Father Moore. “When I went to communion, the first priest I saw was Father Fernandes.”

“Soon after that, I came home with the desire in my heart to do whatever God wanted me to do, and that led me to apply for seminary. Then I had Father Fernandes in my daily life again as my mentor, my teacher and guide. The consistency of Father Fernandes in my life has been a tremendous gift, but also a sign of the Lord’s presence and the Lord’s will leading and directing me on this path to the priesthood.”

After Father Moore’s ordination and following Father Fernandes’ return to Cincinnati from the papal nuncio’s office in D.C., they both lived at St. Ignatius Parish.

“Father Ethan Moore was one of my former students, but when he was living with me at St. Ignatius, the papal nuncio came to visit. And Archbishop Pierre was the Papal Nuncio in Mexico for nine years, so he was very devoted to the Holy Virgin of Guadalupe,” said Bishop-elect Fernandes. “And so Father Ethan has this idea of having 500 cars with the big medallion of the Virgin of Guadalupe on the hood – I have one on mine and He has one on his – and that’s very creative. And then he brought the biker jacket with the monstrance on the back, and he wants to have a bunch of people riding around in their Catholic biker gang. And [Archbishop Pierre} said to me, ‘You know this young priest is very mature.’ And I laughed. I said, ‘Well, mature isn’t necessarily a word that I would associate with him, but he is an entrepreneurial spirit. He knows how to evangelize.’ He said, ‘Exactly, exactly.’ And I think that’s [an example of ] how young people know how to connect others to faith.”

Father Moore said he’s humbled to have these life connections with Bishop-elect Fernandes and is confident in the Catholic Church’s future with bishops like him leading the way.

“Father Fernandes has a way of including people in his life and being there for their lives,” said Father Moore. “He’s able to do that because he first does it with Jesus. My story is unique to me, but it’s not unique to Father Fernandes. He will stop at nothing to bring the mercy of God, the power of the Holy Spirit, and the love of Jesus into the world and into people’s lives.”