Rome Newsroom, Jan 10, 2021 / 03:52 pm MT (CNA).- For the first time in over 54 years, the Franciscan friars of the Custody of the Holy Land were able to offer Mass on their property at the site of Christ’s baptism, located in the West Bank.

The Mass for the feast of the Baptism of the Lord was said in the Church of St. John the Baptist at Qasr Al-Yahud, a shrine built in 1956, and located by the banks of the Jordan River.

The Franciscan friars of the Custody of the Holy Land have owned the 135-acre site since 1632, but were forced to flee in 1967, when war broke out between Israel and Jordan.

Israeli authorities reopened the site to pilgrims in 2011, but demining of the area only began in March 2018, finishing in October of that year.

In October 2020, the keys were returned to the Franciscan friars, and they were able to begin the process of cleaning and restoration necessary to make it safe for pilgrims.

Before the Mass Jan. 10, the Franciscans processed from the Greek Orthodox monastery of St. John to their land. Fr. Francesco Patton, Custos of the Holy Land, opened the gates of the site, which had been closed for over 50 years.

The last Mass offered at the shrine was on Jan. 7, 1967. “They were an English priest, Don Robert Carson, and a Nigerian priest, Don Silao Umah,” who said the Mass, Fr. Patton said in his homily Jan. 10. The priests signed their name to a shrine register which was recovered in 2018.

“Today, 54 years and 3 days later, we could say at the start of the 55th year since this register was closed, at the end of this celebration of the Eucharist, we will be reopening this same register, we will turn over the page and on a new page we will be able to write today’s date, 10th January 2021, and sign with our names, to bear witness that this place, which had been transformed into a battlefield, a minefield, is once again a field of peace, a field of prayer,” Patton said.

The Mass was followed by a second procession to an altar directly on the Jordan River’s bank, where the friars read a passage from the Book of Kings. Custos Fr. Patton then dipped his bare feet into the river’s water.

Leonardo Di Marco, director of the technical office of the Custody of the Holy Land said “urgent work was done to allow the place to be fit for today’s celebration of the Baptism.”

“We are aiming to reopen to pilgrims, who will be able to find places where to linger and meditate in a corner of prayer which will be created around the central church nestling in a garden of palm trees.”

Due to COVID-19 restrictions, a limit of around 50 people attended the Mass. Bishop Leopoldo Girelli, apostolic nuncio in Israel and Cyprus, and apostolic delegate in Jerusalem and Palestine, was present, along with representatives of the Israeli military authorities.

The pastor of the parish of Jericho, Fr. Mario Hadchity, welcomed the friars to their land. “We are delighted, on this special day, that the Custody of the Holy Land, with the help of God, after more than half a century, has been able to return to the Latin church of St John the Baptist,” he said. “May it be a place where all those who enter encounter the grace of God.” 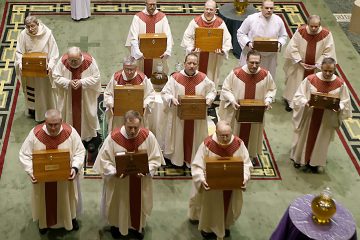