It all started at Old St. Mary’s, the archdiocese’s oldest church, located in what is now one of Cincinnati’s hottest urban neighborhoods. Albert Bloomfield was starting a choir to sing the Tridentine Latin Mass, which had been celebrated there for years without music. He wanted the choir to learn to chant, and the easiest place to start was the Psalms in printed settings of Vespers, the evening “hour” or set of psalms and prayers in the day-long sequence called the Liturgy of the Hours.

But there’s much more to Gregorian chant, the music developed more than 1,000 years ago to allow Psalms and prayers to be sung to the same few “modes” or patterns of notes. All the Mass prayers and readings can be chanted, once singers get the hang of the distinctive sound and the millennium-old way the notes are written. But logistically, for a modern choir starting out? Daunting.

The texts are in books and available online, and the most common chant settings are found in a 2,000-page book called the Liber Usualis. But putting a new set together every week, making the syllables of each text fit the chosen chant, and getting copies to everyone in a choir?

“It’s a nightmare,” said Ben, Albert’s twin brother. Even when what the choir needed was printed in the Liber Usualis, Albert found himself flipping through the thick tome, scanning pages, enlarging the music to make it easier to read and distributing photocopies. The brothers worked together to make a printable book of the Psalms that change each week for Vespers, but then Albert had a better idea: What if a program could do the work for you right on your computer or phone?

Ben, a computer programmer, went to work. The result is the free Chant Tools webpage and app, which people all over the world are using to learn chant, create and provide chants for their choirs, and even plan performances. “I figured if we found this useful, there was a good chance someone else would too,” Ben said.

Dallas Gambrell, music director for St. Joseph Church in Palm Bay, FL, is one. It’s so useful, “Benjamin Bloomfield can plead with that app on Judgment Day,” Gambrell joked. “It’s a flexible and helpful tool. I use it twice a month, publicly, at our regular Tridentine Mass, but it gets more frequent use in choir planning and rehearsal. I can use it to plan and ponder and think about music [for instance], to compile different levels of difficulty into a single PDF. But I can also email a link to singers for extra practice, or load a setting and have them sing straight from their devices.”

At first it included only the Propers (the prayers and psalms that change with each Mass). On pilgrimage to Chartres, Albert asked for the Ordinaries, the prayers that don’t change, so people could sing from their devices without additional references.

The Bloomfields did not advertise Chant Tools, but Ben has heard from singers, choir directors and monks from all over the world. “Brother Gregorius, a Chinese Benedictine monk, said he was honored to use it,” he remembered, “but was sorry it didn’t recognize the Psalms in Chinese.”

Alysia Ladner, music director of Our Lady of the Gulf in Bay parish in St. Louis, said Chant Tools has been perfect to teach her choir. “It has been a crucial part of our learning to sing the Missa Cantata,” she said.

John Ridgeway-Wood, Master of Music at England’s York Oratory, discovered Chant Tools during the country-wide pandemic church closures this spring, and can’t wait for choir practice to resume. “It will be of great use,” he said, “especially as we are planning extra Tridentine Latin Masses.”

Back home at Old St. Mary’s, choir director Brother Brent Lucas uses it “for every single sung Mass” at the parish. “It has so many great features. I will use it as long as it’s available.”

Ben is now working on a version of the tool for the Ordinary (new) Form of the Mass for Source & Summit, publishers of Lumen Christi Missals and Hymnals, and hopes it will be available before the end of the year.

“This year at the Sacred Heart Corpus Christi procession, I was chanting from my phone and someone asked me where I got the app. It was fun to say, ‘I wrote it!’” Ben said. 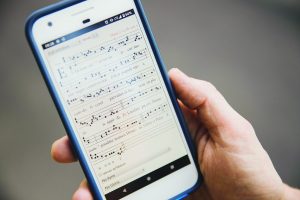