Rome Newsroom, Sep 15, 2020 / 05:45 am MT (CNA).- A basilica in Italy marks the spot of a bloody episode in early Church history — and is home to an image of Mary once lost in the hills for centuries.

On Sept. 15, a Catholic shrine in the small hilltop town of Lenola celebrates the local feast day of Our Lady of the Hill.

The day, marked by Masses and — in pre-coronavirus times — a procession, honors the day a young man repented and converted after a murderous plot, before finding a centuries-old miraculous fresco of the Virgin Mary and Child Jesus.

Servant of God Gabriele Mattei and his two friends found the image, covered by rubble and thick brambles and plants, on Sept. 15, 1602, with directions from Our Lady.

The frescoed image is believed to be from the third century AD. It was painted on the wall of a cave where Christians took refuge while hiding from the persecution of the Emperor Decius.

The Christians prayed in their makeshift shrine, but their hiding spot was discovered. The Roman soldiers killed them all and left their bodies strewn about the cave.

Other Christians in the area heard about the massacre and went up to the cave with a monk to give them a proper burial.

Tired after the work, the Christians fell asleep, only to be awoken suddenly by a loud noise and bright light flooding the cave. They heard a voice saying: “Do not be afraid, hope in God, I am among you for your comfort, here is my image.”

Before them they saw an image of the Virgin and Child, surrounded by angels waving palms and crowns of martyrdom.

This vision and message brought the Christians joy and comfort as they returned back down the hill to their brothers and sisters in the faith — and probably also to their deaths.

According to the website of the Basilica della Madonna del Colle (pictured below), “the Virgin Mother remained to watch over the glorious tombs of the martyrs, waiting for a radiant dawn marked by God.”

It was not until 1,300 years later that the 23-year-old Gabriele Mattei would find himself in the same place.

A handsome young man, Gabriele had a reputation for being prideful and licentious.

On the afternoon of Sept. 14, the feast of the Exaltation of the Cross, he and his friends went to the Hill of the Holy Cross, where solemn vespers were being celebrated.

The three young men were disturbing the celebration from the church square, and were scolded by an older Christian man. The men cursed the elder and hatched a plan to murder him in the middle of the night, with the task falling to Gabriele.

But that night, Gabriele was irritable and nervous and could not sleep, so he took his guitar-like instrument to a spot outside the town to play, looking for peace.

But when he tried to play, the strings did not emit a harmonious sound. His tuning failed; the guitar continued to make shrill sounds. Frustrated, Gabriele swore, threw his instrument to the ground, and invoked the devil.

Gabriele would later describe what happened to the local bishop: “At my invocation, a monstrous infernal figure appeared before me; frightened, I made the sign of the cross and invoked the help of Our Lady.”

“I was about to flee,” Gabriele recounted, “when from a shining light, a celestial voice said to me: ‘Stop, do not be afraid, you have called me! Be converted, climb this hill, you will find my image; I want you to build me a temple, and on the day of the consecration I will make a miracle shine which over the centuries will testify to my presence in your country.’”

Gabriele was suddenly smiling and meek. He went immediately to the parish church, waited for it to be unlocked, and prayed before an image of Mary inside.

According to the shrine’s website, “his presence in the Church, at that morning hour, aroused wonder among the faithful.”

He received the sacrament of reconciliation and went to meet his friends. Gabriele told them that he did not kill the man and explained what happened to him the night before. They did not believe him, but agreed to go with him to the spot described by the voice to find the image of Mary. They intended to kill him if what he told them was not true.

After hours of digging and cutting through brambles and bushes, they found the image of Our Lady, painted on the wall, with blood dripping from her lower lip.

The three young men began to pray and to shed tears of joy. At the same moment, some village children announced that “the image of Mary has been found on the hill! Let’s go to the hill,” and people rushed to the spot.

The local bishop wrote down the accounts of Gabriele and his friends, and gave his approval of the miraculous image.

The villagers quickly constructed a hut to protect the image until the church requested by Mary could be built.

Gabriele set out on a pilgrimage around Italy, France, Spain, and Portugal to share his story of conversion and ask for help to build the church. He carried with him a copy of the image of Our Lady of the Hill.

When he knocked at someone’s door, he greeted them with the words “Deo Gratias,” which means, “thanks be to God.” From this greeting, he became known as Br. Deo Gratis. After three years, he returned to Lenola with the money necessary to build the shrine.

Gabriele dedicated the rest of his life to the shrine, where he lived and served as a bell ringer. He died on Dec. 3, 1656, at age 77, when he was stabbed to death by three men at the entrance to the church.

“Now he rests in that shrine, which he raised in expiation for his errors, in honor and glory of the Mother of Jesus,” the website says.

September 15: Our Lady of Sorrows 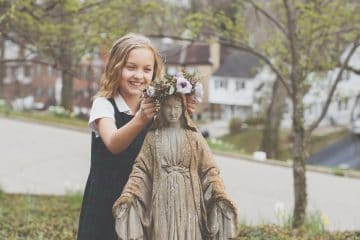