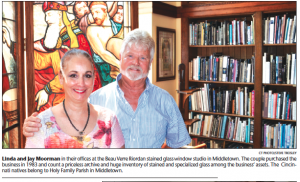 The place in downtown Middletown is part art studio, part workshop, part museum, part archive and part restaurant.  And if you’re uncomfortable eating in a restaurant with a large stained glass representation of Jesus in the Temple, owner Jay Moorman says, “you can just go eat someplace else.”

What started as a hobby and passion has become a unique business that surrounds its family owners with glorious works of art.

If you’ve been to St. Maximillian Kolbe Catholic Church, Alter High School or any number of other Catholic churches in the archdiocese, you have been surrounded by Moorman’s work. In fact, he used his own image a model of one of the Twelve Apostles in the Last Supper windows at Saint Max, so he’s there with the work.

What Beau Verre (Beautiful Glass) Studios represents is as varied as the activities housed in the reclaimed 5-and-10 store building where the business is housed. The building itself is a reclaimed masterpiece that has been gutted and refitted, in some cases using woodwork and building materials from a Middletown school that was torn down in 2005.

With its restaurant, it represents the Moorman’s commitment to revitalizing the downtown business district. Jay was a Cincinnati west-ender, his father a stereotyper at The Cincinnati Post and Times-Star who was a member of St. Lawrence Parish. Jay went to school at St. William. Linda was baptized and educated in St. John’s (now a part of Holy Family Parish) in Middletown and that’s where the couple was married.

He was looking for land for his business when the city offered him the building — for $100. It was scheduled for demolition, price tag $300,000. He gets incentives for each employee he hires, too. The building is now the centerpiece of the Central Avenue business district. He was also successful in getting local investors to back the restaurant, Stained 1054 Bistro, and entered into a partnership with the Red Onion Restaurant in nearby Monroe.

“I’d rather leave something like this behind,” he said gazing at his surroundings, “than a bank account,” when he’s asked about the size of the investment in the building.

The company flows not so much from the work the Moormans did building his hobby into a business in 1983. It’s more like two streams coming together to form a mighty river of glass artistry. One stream is the world-renown G.C. Riordan Company, founded in 1838 when Cincinnati was a hub of stained-glass window activity.

Jay had worked for the Riordan Company when it was owned and operated by Walter Bambach. He learned the craft from Bambach and soon found himself working 40 hours a week as an inspector at GE and 40 hours a week at the stained glass business.  When he first started, almost 40 years ago, he worked for leftover shards of glass. But he did a window for a physician in Cincinnati in 1983 who later contacted him about doing the windows for a mosque near Dayton.

He’ll soon be doing an installation at Holy Trinity Church in Dayton and points to Riordan-signed windows all over Cincinnati as possible future clients. “Most of these windows were installed at the end of the 19th century, so they’re 100 years old or more now.” At any given time, the company is working on at least 30 jobs.

His passion for his craft is manifest in the time he invests in learning. He once spent several months living in a hotel in Cleveland so he could learn etching and beveling from an artisan there.

The Moormans employ nine credentialed artists in the stained glass business and does his own design work on original pieces.

The treasury of watercolor works that are scale representations of Riordan’s window designs are an invaluable part of the business. Baumbach’s wife offered to sell them to him when he bought the company and while Linda, the more business minded and more frugal of the life partners was cautious, they both decided to keep the archives with the business. “There are several blue print cases of these and we haven’t even had time to look at all of them,” Jay said showing some of the works displayed on walls in the studio.

The building houses other businesses and a tastefully appointed conference room that can be rented for meetings or small group events with catering available.

“We offer tours,” he said. “I can imagine there are a lot of Catholic groups that would enjoy a tour of our studio. All they have to do is call and make the arrangements.”

With 175 years of continuity, the Moorman’s have employed their sons and a niece in the business. They were recently recognized by Ohio Gov. John Kaisich for their success. 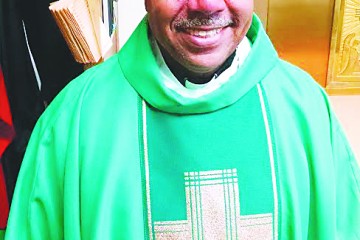