Everyone deserves a second chance and the opportunity to discover God’s purpose for them. Firm in this belief, Christine and Todd Marallen established a program called Damascus in 2015. Damascus helps previously incarcerated citizens return to life outside prison by helping them acquire and maintain gainful employment. It provides staffing to companies that actively recruit and employ workers with a history in the criminal justice system. The program currently operates in five prisons (Lebanon, Warren, Dayton, Ross and Madison Correctional Institutions).

Christine brings a wealth of experience in working with the incarcerated to their ministry, including many years as the director of prison ministries for the archdiocese, a role she left the summer of 2019 to devote more time to Damascus. Todd lends his business savvy and background in investment consulting and information technology to Damascus as its CEO and president.

Unmet Needs
The organization’s name refers, of course, to Saul’s conversion on the road to Damascus. “Paul’s story provides the basis for what we do,” Christine explained. “Everyone falls off their horse at some point and is blinded to their purpose. We all need someone bigger than us to help us recognize and live out our best selves.”

“We saw a need that wasn’t being met,” she added, acknowledging that other re-entry programs don’t provide comprehensive services and support to returning citizens. “And, part of our mission as Catholics is to use our gifts to help others.”

Their relationship with future workers typically begins with men and women who are still incarcerated and within a year of release. After the application process, the men and women take part in a 10-week class with Damascus staff that focuses on topics such as “all the areas of their lives that have tripped them up, their own biases, trauma, the five love languages, bridges out of poverty and workplace etiquette,” Todd said.

“It’s really something to see these big, tough guys, especially, suddenly realize so many things that severely impacted their lives,” said Todd. “The end result is not excuses. It’s ownership.”

“It’s a judgment free zone,” Christine added. “We want them to know that they’re worthy, that they have permission to forgive themselves. But, none of this is a free pass. It’s an awakening.”

The last assignment before graduation is to create a “life plan,” outlining their goals and plan for success.

Program Growth
Approximately 400 people have taken part since the classes began in February. Support from Damascus continues after release, as client account representatives help workers navigate the barriers to success, from transportation to child care, and assess their ability to work.

Damascus operates as a staffing agency, providing 24/7 support for workers and clients. Most positions are on a “temp-to-hire” basis. As long as the client is happy with the individual’s work, they typically transfer the worker to the client’s payroll after three to six months on the job.

“We understand that this is a leap of faith for employers, and we value their trust,” Todd said. “We take it off their plate to handle any issues.”

In her role as a recruiting specialist, Shelley Castellini-Scott worked with Damascus to fill a number of positions at her previous employer. “They were fantastic to work with, very flexible, and were great about making sure we were comfortable with the process,” she said. “They opened up more of a talent pool for us and we gained loyal, hardworking individuals as a result.”

Derrick McElroy, who spent two years in prison, is grateful for the opportunity and support Damascus provided. “For someone to come along, give you a chance and believe in your success is a big thing,” he said. “We had the chance to think about the bad decisions we made, focus on how to see things coming, and learn to make better choices.”

Mike Carr, director of community engagement for Damascus, served a two-year prison sentence. As he confronted his own errors during rehabilitative programming, Carr became aware of other men who had made mistakes, were willing to be held accountable, and deserving of a second chance.

His current ministry is particularly meaningful. As Damascus continues to expand, he said, “We’re really having a tremendous impact on the lives of returning citizens and the
local community. I really admire what Christine and Todd are doing and feel blessed to be a part of it.” 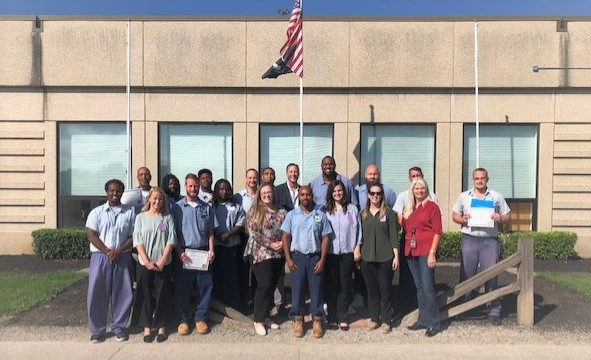 The Bridges to Life Program for Prison Ministry