Story and photos by Jessica Rinaudo

It was a somber day walking into the offices of Catholic Social Services of the Miami Valley (CSSMV) in Dayton. Archbishop Dennis Schnurr was there to visit and hear the stories of CSSMV workers and volunteers who have spent every day since the May 28 tornado devastation helping victims get back on their feet.

The room quickly filled with staff members who assist with everything from Federal Emergency Management Agency (FEMA) applications and long-term aid, to helping displaced expectant mothers. Despite their range of assistance efforts, their stories all shared a common theme: In devastation there is help and hope.

Story after story of victims were told through choked voices and tears. There was a family whose father and sole financial provider had suffered a stroke the day before the tornado hit. His wife and children were struggling with the financial ramifications of that tragedy, and had a giant tree sitting on top of their home and covering their yard.

Families with four to eight children struggled to find affordable, available and large enough rental housing following the scarcity and elevated prices of the market after the tornado. If families were lucky enough to find a rental, application fees for the space quickly became something families couldn’t manage.

Many lost everything: their home, place of work, income, vehicle, furniture… even things as small and crucial as pots and pans.

The needs of victims varied, but CSSMV was there to help.

Megan Goettemoeller is a community health navigator for CSSMV. Although a primary part of her normal day-to-day job is helping expectant mothers and mothers with infants, her work quickly expanded in the wake of the tornado destruction. She began taking phone calls from people who had no place to go. She was working to house them at a local motel, when CSSMV received a welcomed phone call.

“Immediately after the tornado, the University of Dayton called us, and they wanted to do something to help. Since it happened in the summer, the students weren’t on campus, so they generously offered campus housing to families that were displaced that we were working with,” said Goettemoeller. “So we had a family from Keiser Elementary School, families from our parenting program. We had some families that we had connected with through St. Vincent de Paul locally, that UD agreed to assist with housing, and we agreed to assist with case management.”

That relationship provided housing for families for about four weeks – desperately needed time to make action plans for their future.

Tamara Gaddis-Strozier initially joined CSSMV to help with short-term relief but has since been hired as the recovery navigator to help with ongoing cases. “A lot of people are able to take care of themselves if they can just get a good start,” said Gaddis-Strozier. “They’re not asking for a hand out, they just need that first piece, and then they can manage on their own.”

She added that another area of the population who are struggling in the aftermath of the tornado are the elderly. In some cases, dementia and being in an unfamiliar environment following the tornado have caused greater problems.

“Seniors are a very vulnerable people who have been affected here,” said Laura Roesch, chief executive officer for CSSMV. “It was a particularly cruel path that the tornado took – communities that were already struggling were hit hard.”

Many avoided seeking help after the natural disaster, either believing they wouldn’t qualify for assistance or because they were ashamed to ask for aid.

“Being able to come to a place where you can still have your dignity after having to seek help is important,” said Roesch.

All agreed that the community of Dayton and the outpouring of support they have shown for their fellow neighbors has been incredible.

“Even FEMA that comes in town has shared stories that the response they’ve seen in Dayton is unlike anything that they’ve seen in communities they’ve worked with,” said Mary Reid, director of social services (Dayton). “That’s their job – to go to communities and help them pick up, and they are so blown away by how quickly our community has mobilized and the generosity of community.”

The support we have received from the archdiocese and the churches personally blew me away. When we found out that you [Archbishop Schnurr] had suggested a second collection… what we received was way over what we thought we would receive,” added Mike Lehner, director of marketing and development for CSSMV.

In response to these stories of devastation and assistance, Archbishop Schnurr said to the group, “It speaks volumes that people here have taken on extra responsibilities and clientele just to be able to help. Listening to the stories. This isn’t a job, you’re really getting into the people’s lives and you’re hurting with them, for them. To educate them on the various opportunities, with FEMA, in particular, that they’re overlooking, I think you’re doing a fantastic job. And thank you for that.”

“We love our staff all the time, but we’re extra loving them and this group, in particular, because of the way they have stepped up, working together, and developing and sharing and supporting each other,” responded Roesch. “Many of us have people who we know who were personally impacted, or our families. This is definitely a community issue.”

Following the listening session, Archbishop Schurr traveled around the Dayton community seeing the damage firsthand, bearing witness to the recovery efforts, and praying downtown at the site of the Dayton mass shooting, which was less than two weeks old at the time.

Rolling through the streets of Dayton was a gut punch. Pristine houses and businesses sat next to homes that had been reduced to rubble. At times, the only recovery work people could do was to clear their lots and start anew. Trees lay in piles of snapped branches, roots exposed, while blue tarps dotted the horizon. The echo of hammers traveled across the otherwise quiet landscape.

As Archbishop Schnurr stepped out of the vehicle in one of the hardest hit neighborhoods, Roesch and Gaddis-Strozier stood next to him, sharing stories of devastation and long-term recovery efforts. Part of the visit also included a stop at Kiser Elementary School in Old North Dayton, where many of the students affected by the tornado attend. Faculty and staff met with the archbishop to share how they are helping students in the aftermath of the storm.

During the visit, Archbishop Schnurr also visited Queen of Martyrs Church. The pastor and parishioners were there to greet him and show the extent of damage incurred by the church building and school, both inside and out. An entire corner of the church was missing, though the statue of Mary stood in perfect contrast to the jagged bricks. Inside, insulation was exposed and windows were blown away. Despite the damage and scarcity of available contract workers, parishioners banded together to begin repairs, even anticipating the reopening of the parish school in a few days’ time.

Although Dayton is beginning the healing process, it is not something that will happen quickly. “We learned that long term recovery can be two to three years,” said Roesch. “About 15 percent of that registration number will require long term support – that’s about 850 families.”

“This is not something that’s going to be over in six months or a year; communities are lost forever,” added Lehner. “We’re going to rebuild. Our biggest fear is… the reporters have already left. The tornadoes are old news. Eventually, that support is going away. When that dries up, what are we going to do?”

CSSMV is committed to helping members of the Dayton community heal and rebuild over the coming months and years. For more information about volunteering or financially assisting CSSMV recovery efforts, contact Mike Lehner at (937) 223-7217 x1142, or [email protected].

Information if you’re having a significant Wedding Anniversary this year 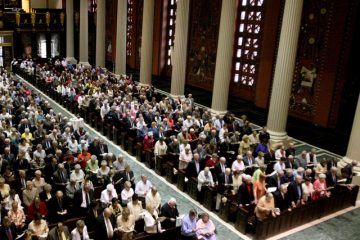